This past fall I became my own client. I have lived in my modest little home for a surprising number of years and have only recently admitted that my initial intentions to remodel and expand the kitchen, bathrooms and guest room have fallen by the wayside in order to focus attention on serving my clients at work. Like many folks, I became somewhat immune to a number of inconveniences and artistic flaws at home while I worked on exacting architectural designs for others. But one day late last summer, I needed to change a recessed light bulb above my old claw-foot tub in the main level bathroom. I first put a stool in the tub to reach the bulb but found it wasn’t tall enough and the stool was unsteady due to the sloping edges of the tub. I thought that if I could stand with my feet splayed on the edges of the tub I could reach the bulb. As I was doing this, it occurred to me that this is exactly how people get themselves into trouble. It was at this very moment that I decided I needed to get rid of the tub. Thus I finally launched into a bathroom redesign. And this time I wasn’t going to ask my husband to do the work. 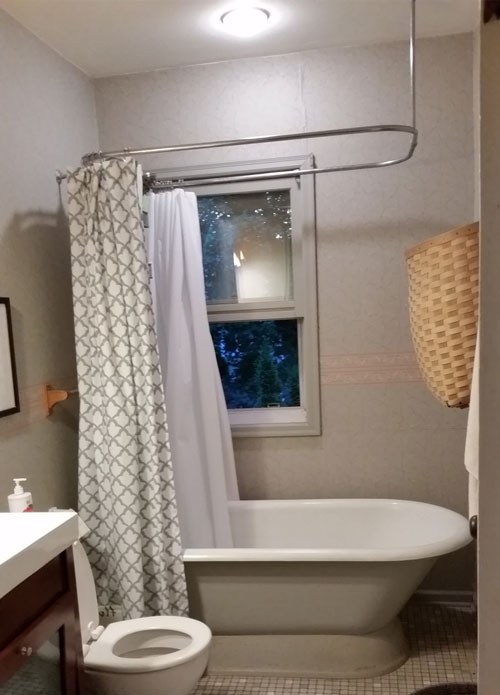 I sketched out what I thought was a very simple plan showing a walk-in shower where the tub had been. I went shopping for tile, thinking that I would redo the floor tile in addition to the shower walls and shower floor. I found a beautiful ceramic wall tile that was 9” x 36” that fit my budget. I wanted to install the tile horizontally in the shower stall. I was ‘seduced’ by the matching herringbone tile and decided to use it on the main floor of the bathroom.(Requiring more $$) Then I found an irregular stone tile that complimented both for the shower floor. (Even more $$) Oh, and then there was this beautiful geometric tile that complimented the others that I felt would be a subtle addition at the back of the shampoo nooks in the shower. ($$) Needless to say, the tile budget grew and grew. But then I thought I should add an electric heating system under the floor tile. ($$) Subsequently, I thought it would be beautiful to have the builder install whitewashed wood paneling on the remaining walls of the bath to align with the shower tile. The wood paneling had to be white oak veneer, glued up and finished to blend and align with the shower wall tile. The bathroom is only 5’-7” by 7’-9” so I felt this would be sort of affordable? Naturally, I thought the joint between the shower tile and wood wall panels should be exacting and minimal and that the glass shower partition should be inserted between the two materials with the metal support hidden between. ($$) I searched the web for plumbing fixtures to replace the old ones, and was delighted to find the build.com site where upper-end fixtures can be ordered and shipped for free at a reduced price. But they still cost a good deal more than standard fixtures. ($$) Because the bathroom was small I decided to cover the entire wall above the sink and toilet with a single large mirror to make the room seem bigger. 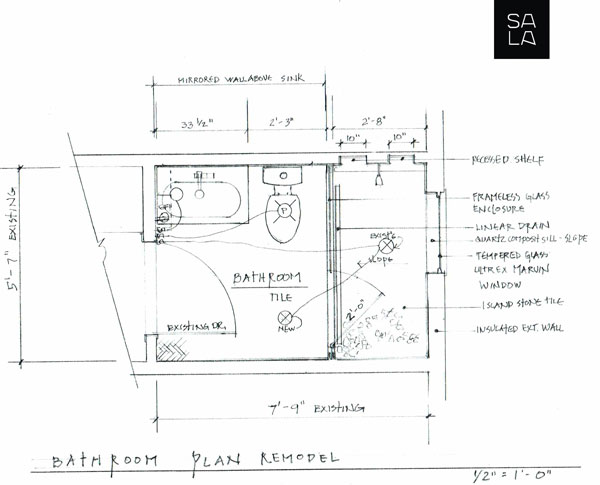 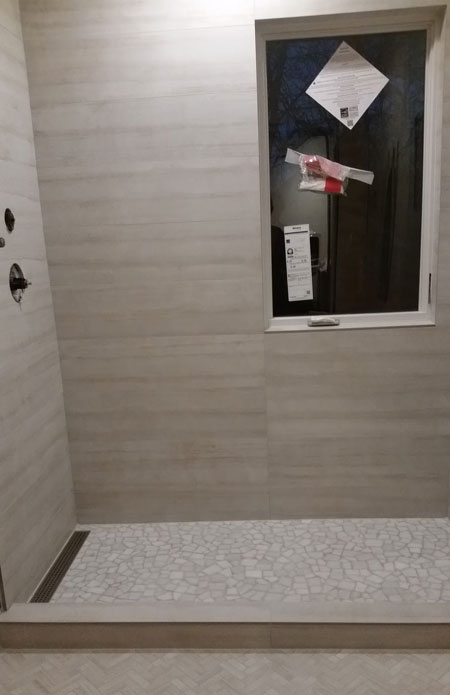 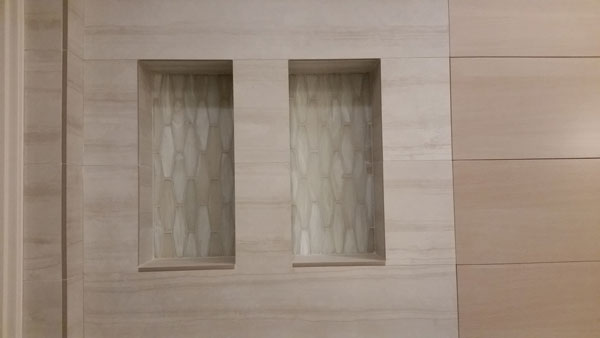 When demolition started the tile and plumbing fixtures were on site. We discovered that the walls were anything but plumb and needed to be straightened and plumbed for the large format tiles. After this was done the tile contractor voiced his concerns about the window in the shower. Though I had purchased an all fiberglass window, he felt the window was too close to the showerhead. So I decided to move the window to the farther end of the shower. Note that this decision was made after the wall had been framed and insulated. (Yep, $$) 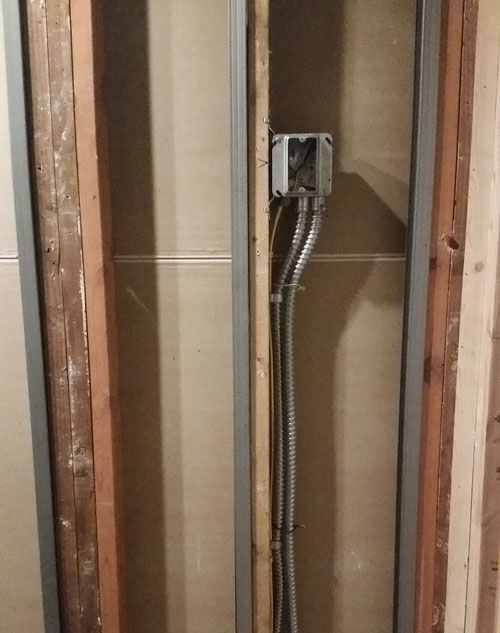 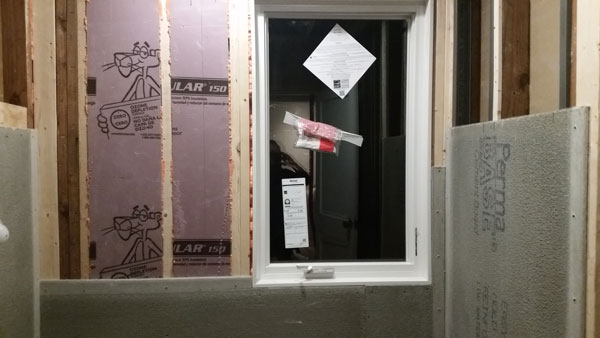 So you can see where this is going. As my own client, I had to own responsibility for the escalating costs of the project. As a client, I appreciated my designer’s (me) motivation and design skill. But most of all, as my own client, I gained insight into what it was like to be a client of mine; a bit humbling, I might add. My kudos go to the builder who was enormously flexible and totally dedicated to my rigorous design requirements. Now I have to think hard about whether to consider a kitchen or guest room project! 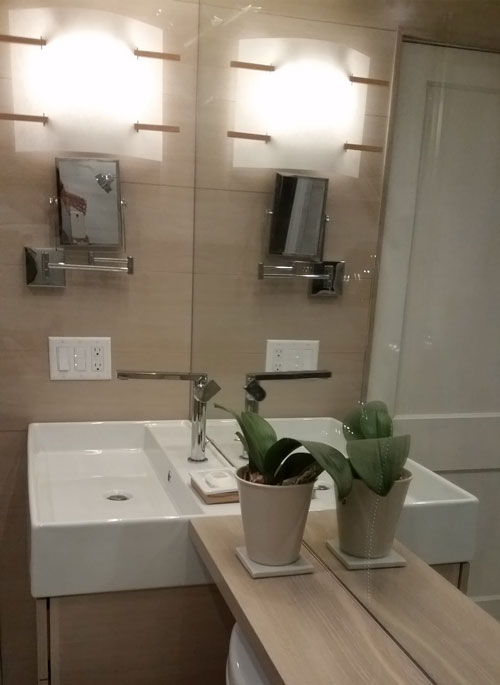 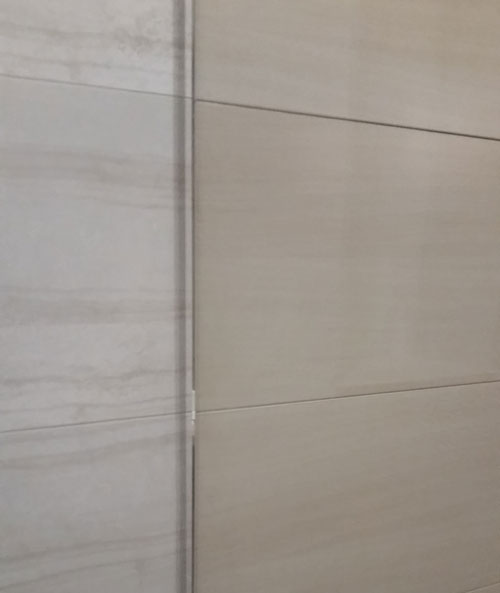 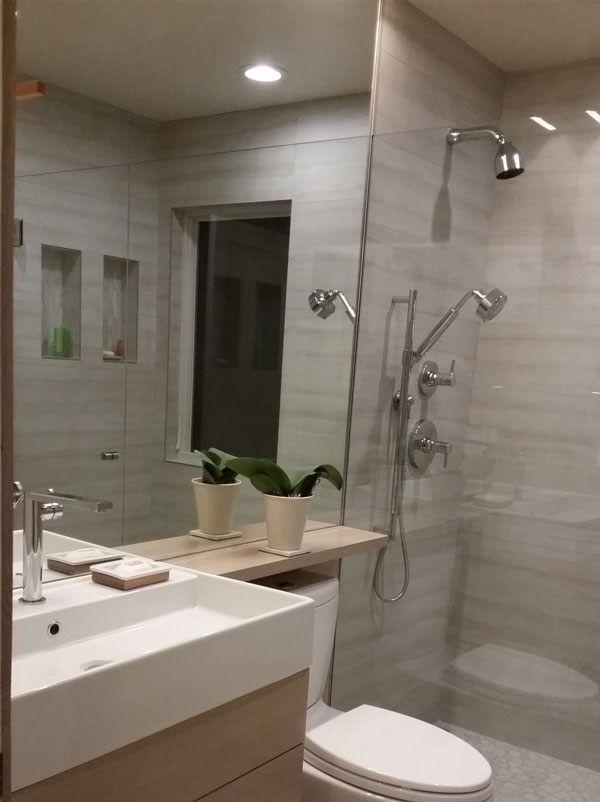