Because of our current infatuation with modern architecture and renewed interest in pure geometric form, roof edges have often been reduced to a simple bend from a sloped or horizontal plane to a vertical plane. This minimal expression of roof edge might have a slight interruption, a metal ledge that projects a few inches outward to encourage water to drip away from the vertical plane, but It remains a sleek and pleasantly abstract expression of form that can be fairly economical to build. 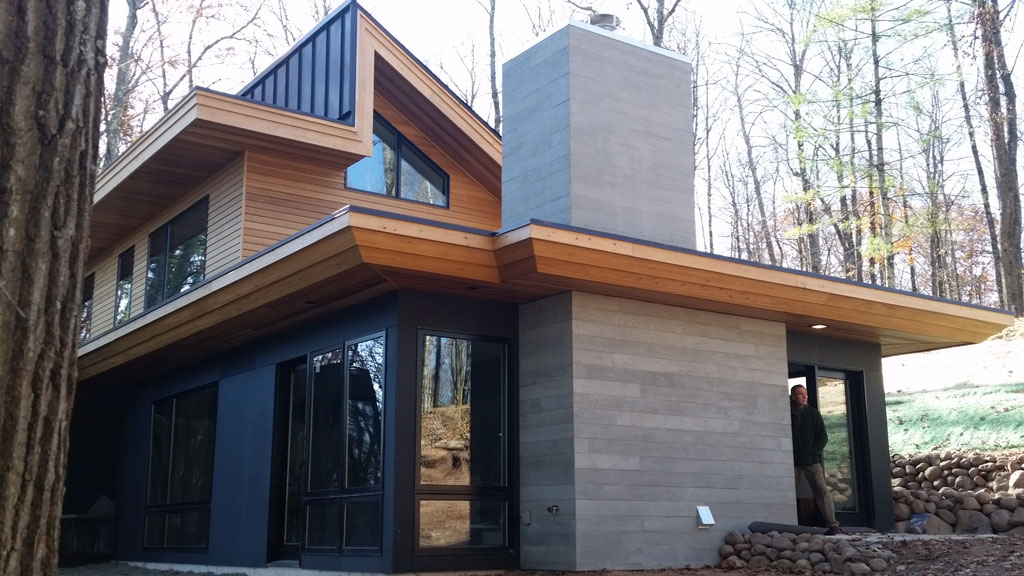 We feel fairly secure proffering this minimalism in our designs simply because we can rely on recently improved building methodologies and materials. i.e., modern technology. We can choose a slightly more aggressive approach to shedding water from flat roofs and still retain the look of an uncluttered edge by using a parapet wall and tapered roof insulation to direct runoff to strategically placed scuppers or downspouts. Though this involves a bit of chicanery, it maintains the “oh so desirable” simple line at the top of the wall. 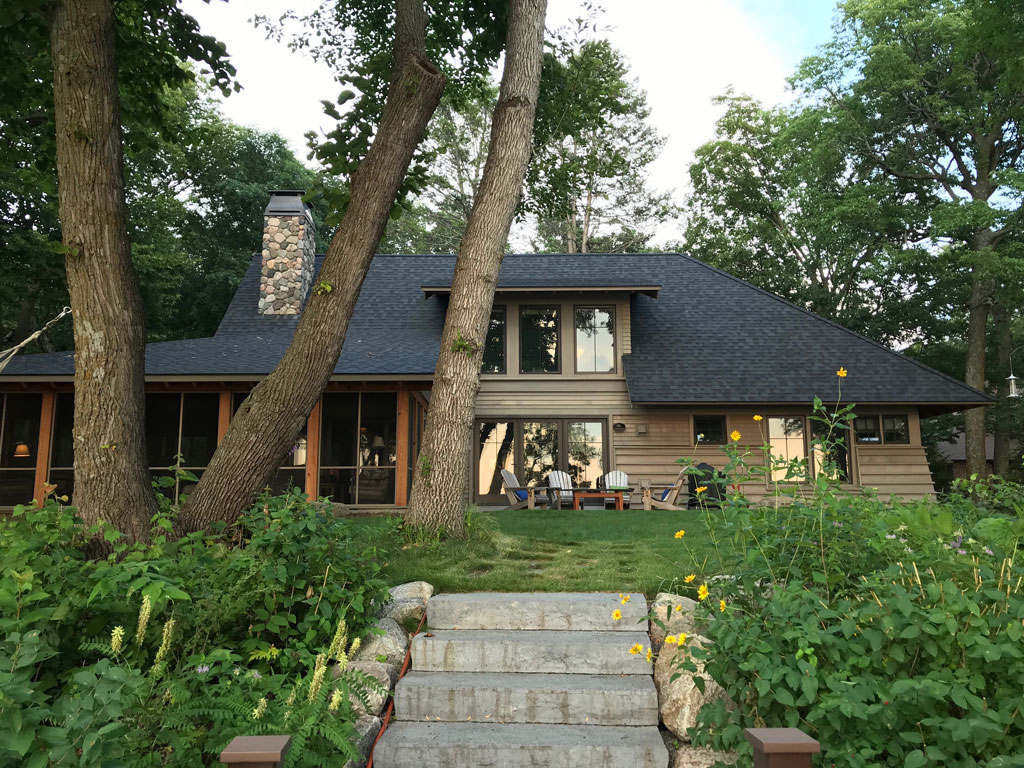 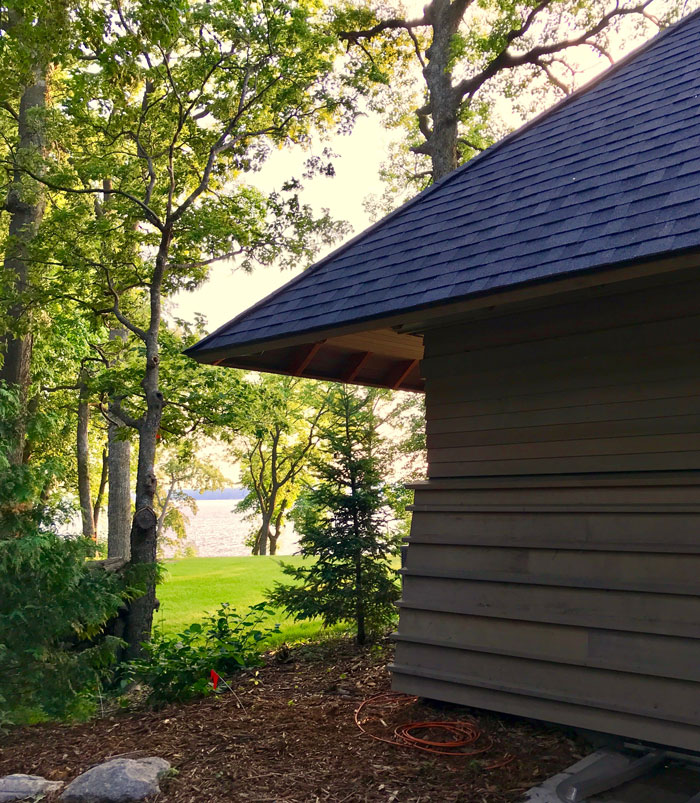 But what price do we pay for this crisp abstraction of form? Alas, water may be the greatest challenge. Water can wick its way, ever so furtively, into the tiniest of fissures. It requires a good amount of skill and redundant material to outsmart it, especially at joints and edges. But water isn’t the only difficulty. We have the sun’s gift of ultraviolet light to contemplate. UV loves to degrade many of our most commonly used siding materials. And then there’s that other mischievous act of nature to consider, wind driven hail. 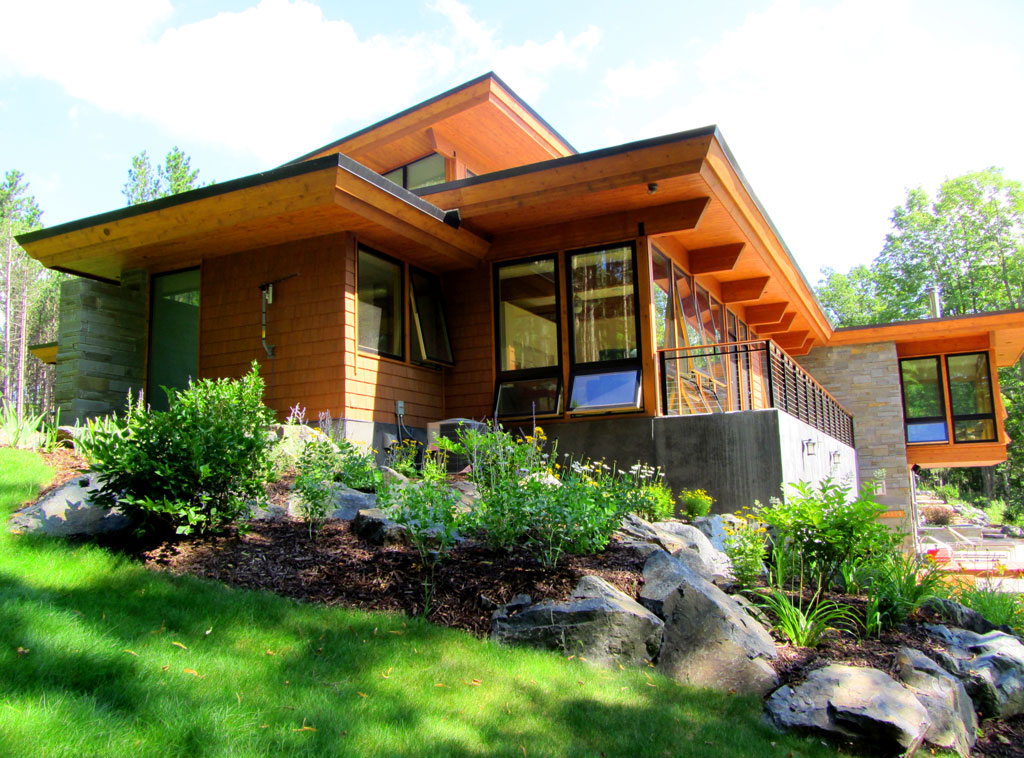 ADDRESSING THE ELEMENTS
These acts of nature beg us to respond with the simplest of architectural responses. Roof extensions simply act like an umbrella for the walls below. It’s a matter of physics. Substantial overhangs force water well beyond the vulnerable wall/roof juncture and then direct it out beyond the foundation below. If the drip line is far enough from the walls, it may eliminate or at least reduce the need for gutters. Furthermore, deep overhangs shade the walls below from the damaging effects of intense sunlight and the occasional assault of a hailstorm. This is especially true if the walls are single story. 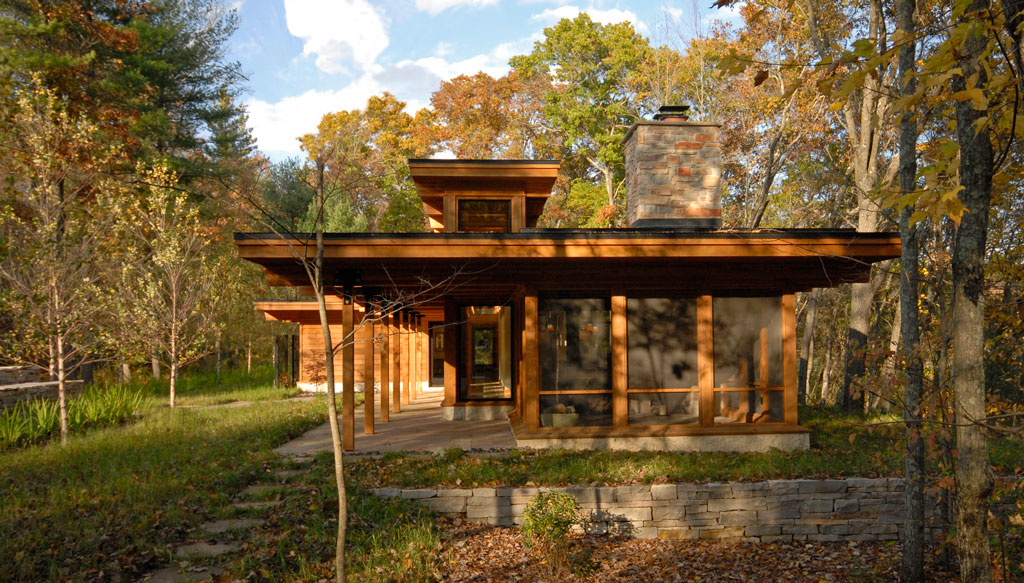 BEYOND  PHYSICS AND BUILIDING SCIENCE
But there are other less tangible arguments that persuade us to consider the overhang. Prairie School architects were known for integrating their structures into the landscape by horizontally extending rooflines. The greater the overhang was, the more powerful the integration. 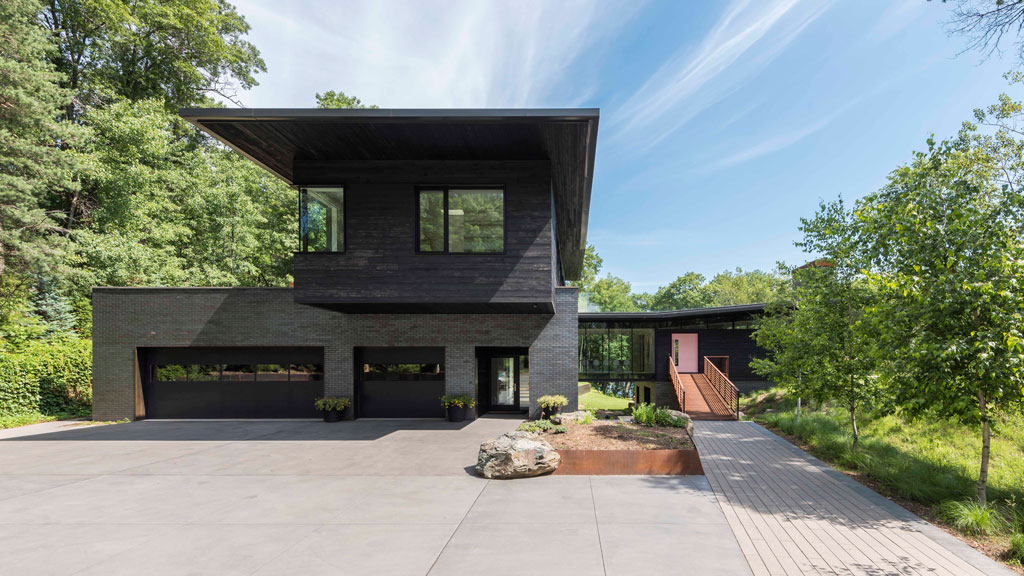 Expanding on this theme, architects have extended rooflines to create a greater sense of connection, both to the land and our interaction with it. Extended eaves form protective and intimate spaces to sit under during a sudden summer rain or evening sunset thus expanding our circumference of living. There seems to be a pronounced psychological response to low-slung eaves as well. They generate a sense of comfort and protection. In addition, roof extensions that hover closer to the ground reduce the scale of a building. The impression is more welcoming, less intimidating. Even the shadows cast by overhangs lend a certain demure quality to a structure and thus a sense of intrigue and interest. And finally, but certainly not lastly, extended roofs finesse our entering and leaving by sequencing the experience. Instead of encountering an abrupt form into which we enter, we experience a gentle progression from exposure to enclosure. 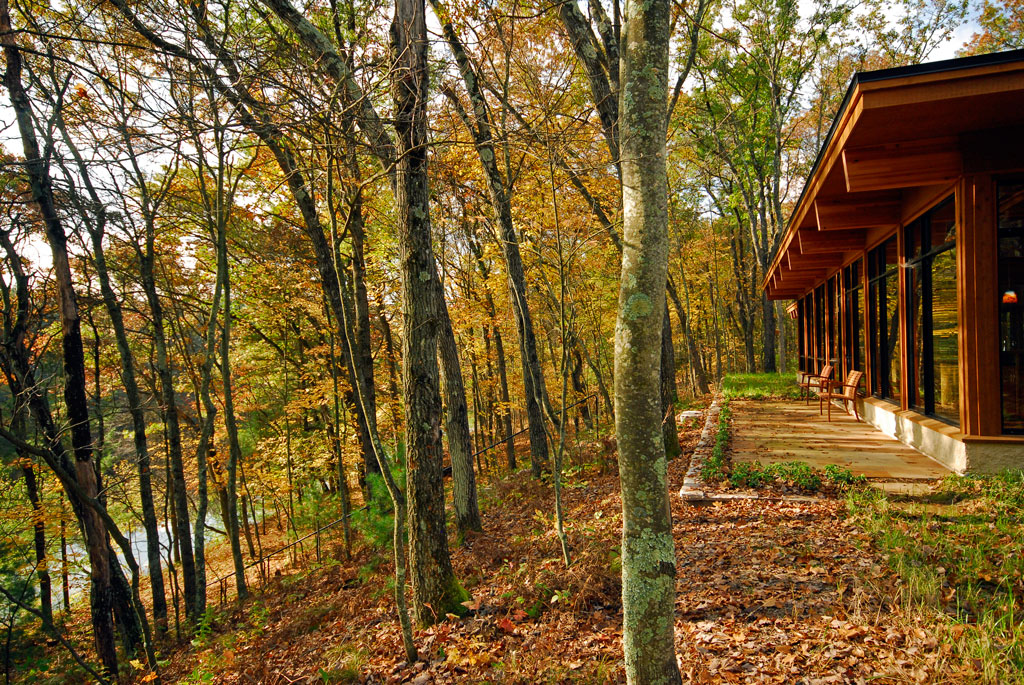 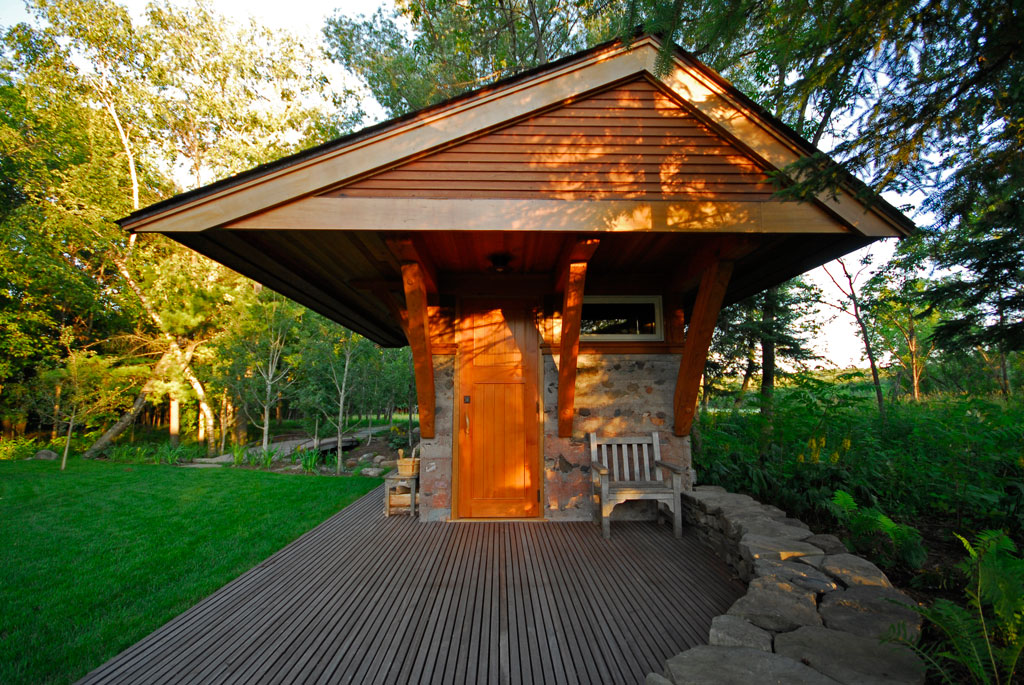 Though we might yearn intellectually for simple form in architecture, our basic human nature sways us toward sensible yet expressive propositions. Our infatuation with modern “boxes” is evolving. It is perhaps developing into simple forms with extruded edges. 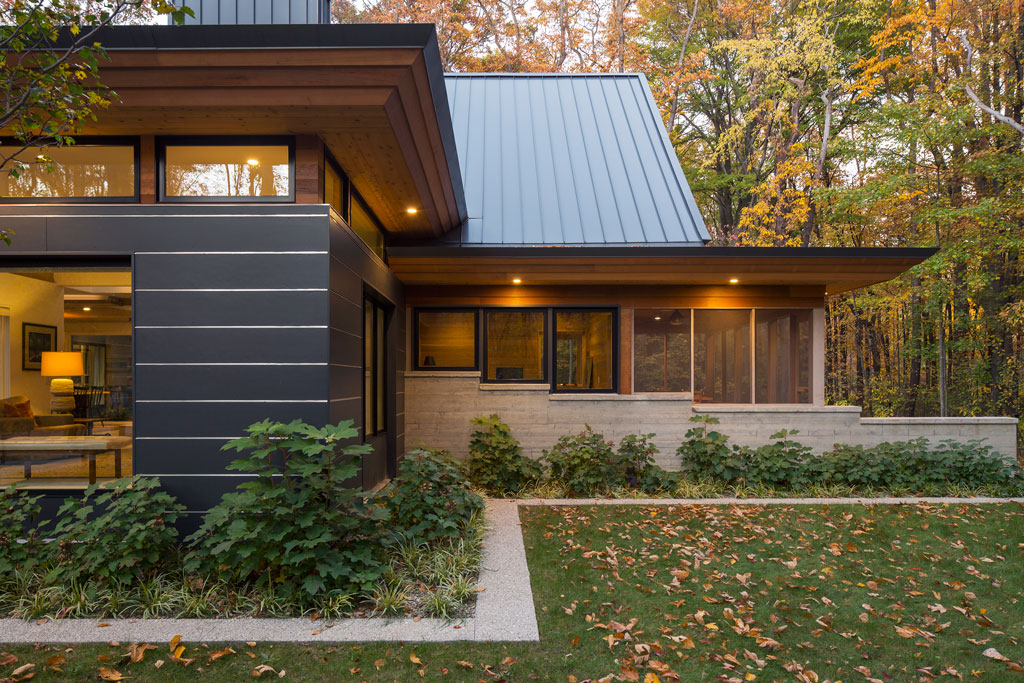