About 3-1/2 years ago John and Helen Shiely, purchased a property on the St Croix River in the city of Prescott, WI. Shortly after, they contacted me about renovating an old structure on the property that John’s great grandfather, a carpenter, had helped build. While growing up he had spent time on Lake Street in Prescott where other family members lived including his grandfather. John and Helen live in eastern WI where they worked and raised a family. The connection to Prescott and maintaining family connections in the area motivated them to purchase the property and embark on a long and interesting project to create what John dubbed “The Love Shack”. 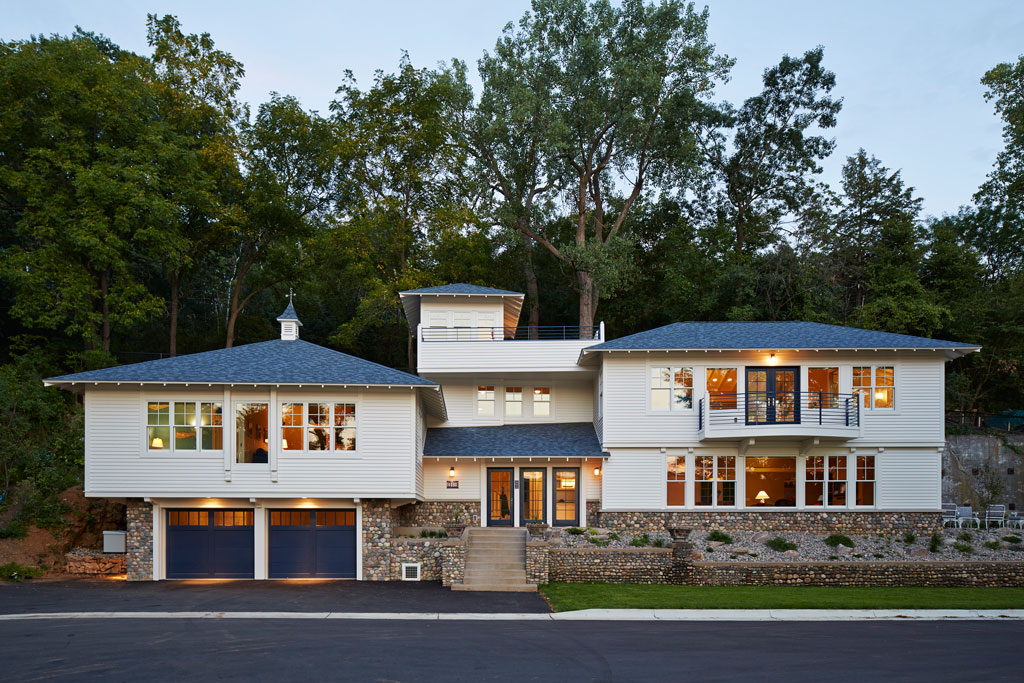 When I saw the buildings the first time I thought it was a place with an interesting past. The proportions of the main building had a wonderful scale. A large tall wall east of the house, which nearly touched the back of the house held back the hillside above. Facing the street, west of the house was a shorter stonewall with piers topped with urns. Across the street at the riverbank were more stonewalls and concrete benches. The stone was small river rock laid in a way you might see on a cabin up north. The walls and buildings were likely built around 1910-1920. Here is a historic photo showing the main building just next to the tall retaining wall. 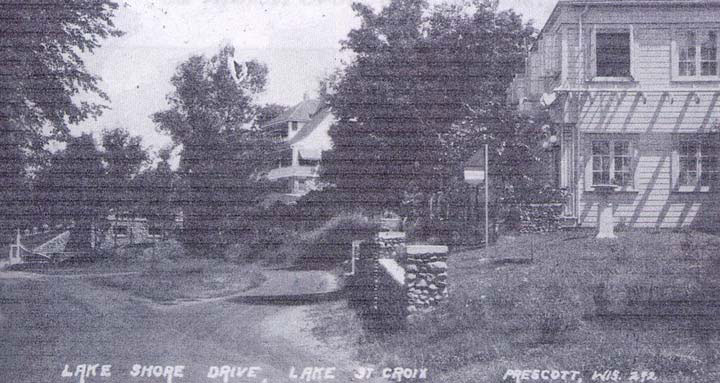 John and Helen had a clear goal to either restore the existing buildings or if necessary rebuild new. In either case, the overriding goal was to capture the character of the original buildings while providing the living requirements for the Shiely family. After some preliminary research of zoning, building codes, and the condition of the existing structures we determined the house portion of the complex was too deteriorated for restoration. Additionally, the large retaining wall was too close to the building to allow adequate access to the east side of the building as it was positioned. 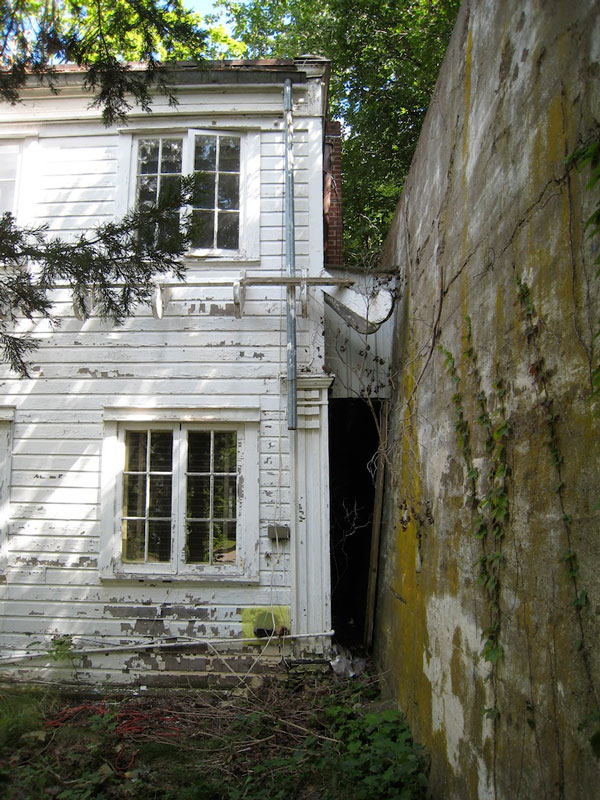 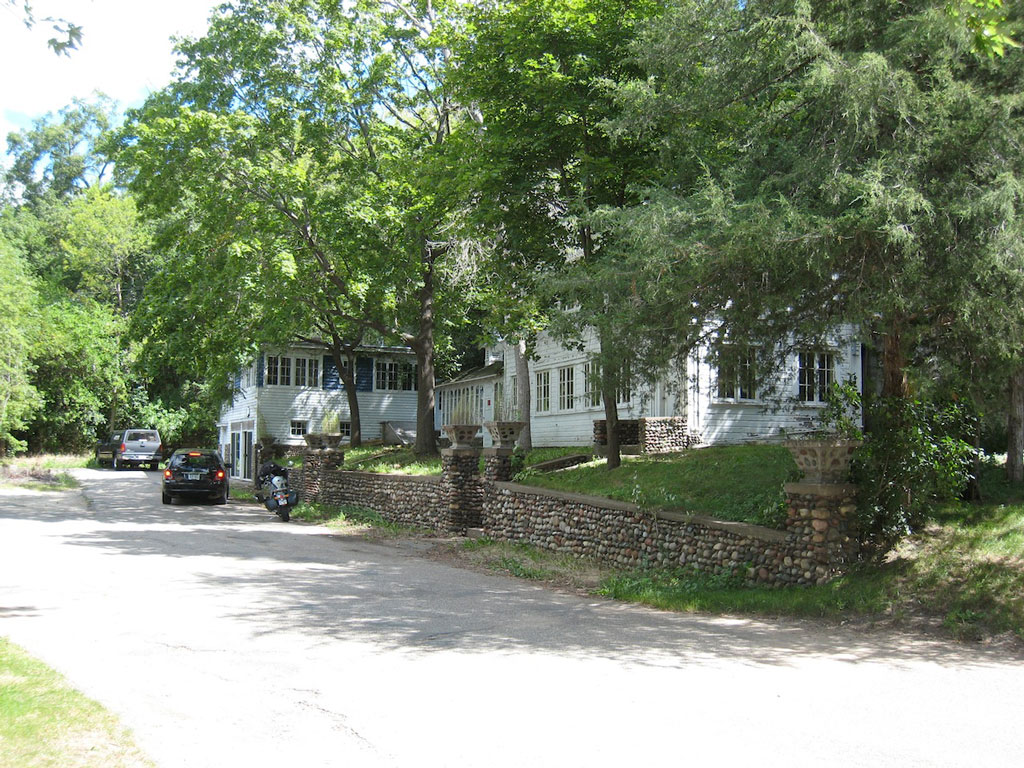 Once we decided to build new we began designing a building to achieve the Shiely goals. The solution required applying for variances to the existing ordinances. The old buildings were likely built without any regulation. Today, especially on the St Croix River, building is intensely regulated. Normally, if a local authority grants variances, they can be implemented. In this case, after approval of our variance requests from the city, the Wisconsin DNR challenged the variances granted. After some months, an agreement with the DNR that altered our original variances was achieved. The agreement made modifications to the original design necessary.

The basic change resulted in the new building still being sandwiched between retaining walls like the original buildings. Our original design was to move and rebuild ½ the larger retaining wall so there would be better access to the east side of the building, and better water management could be achieved. Without this option open to us we needed to make sure the 80 plus year old retaining wall was stable and safe to build next to. This resulted in anchoring the wall to the bedrock behind it with long steel rods drilled through the wall and epoxy cemented into the bedrock. We then added a wire mesh to the surface of the wall to hold vines that will grow up and cover the wall with greenery. Once this work was completed the construction of the structure could begin. 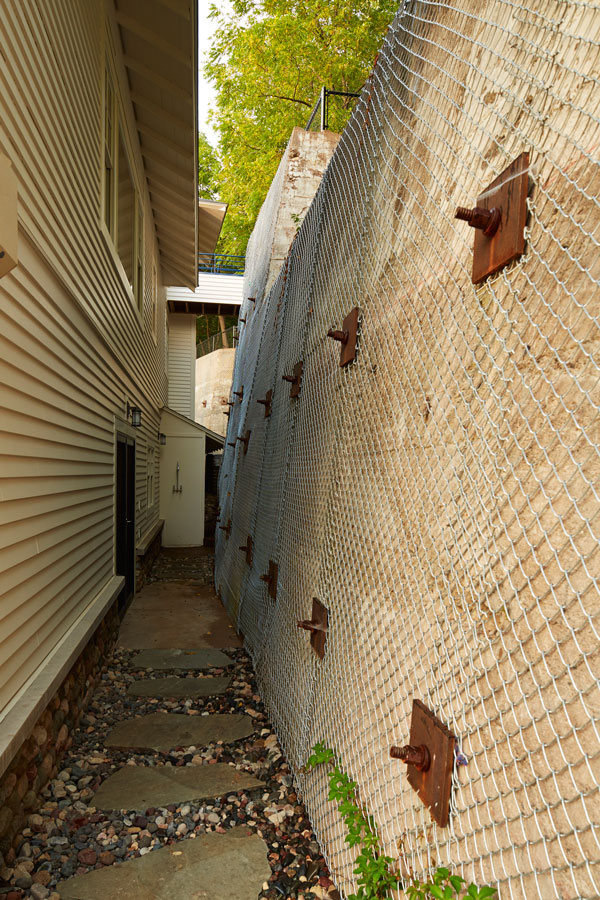 The house itself was made larger to accommodate the needs of the family while still maintaining the sense of scale the original buildings had. The structure is essentially three separated elements to aid in keeping the feel of a smaller scale. The guest wing on the north is the same footprint and volume as the original upper garage space while the lower garage space was actually reduced per the agreement with the DNR. The house is also the same footprint length as the original but with 6 feet added to the back of the main portion width. The original main space was only 14 feet wide. This main element was repositioned on the site closer to the river per the agreement with the DNR. The middle portion was originally a porch, which we altered to be an entry and vertical circulation element to climb to the roof deck. This element is new but after seeing the recently discovered historical photo we have seen that even more elevated elements were part of the original complex. Had we only had this while speaking with the DNR! 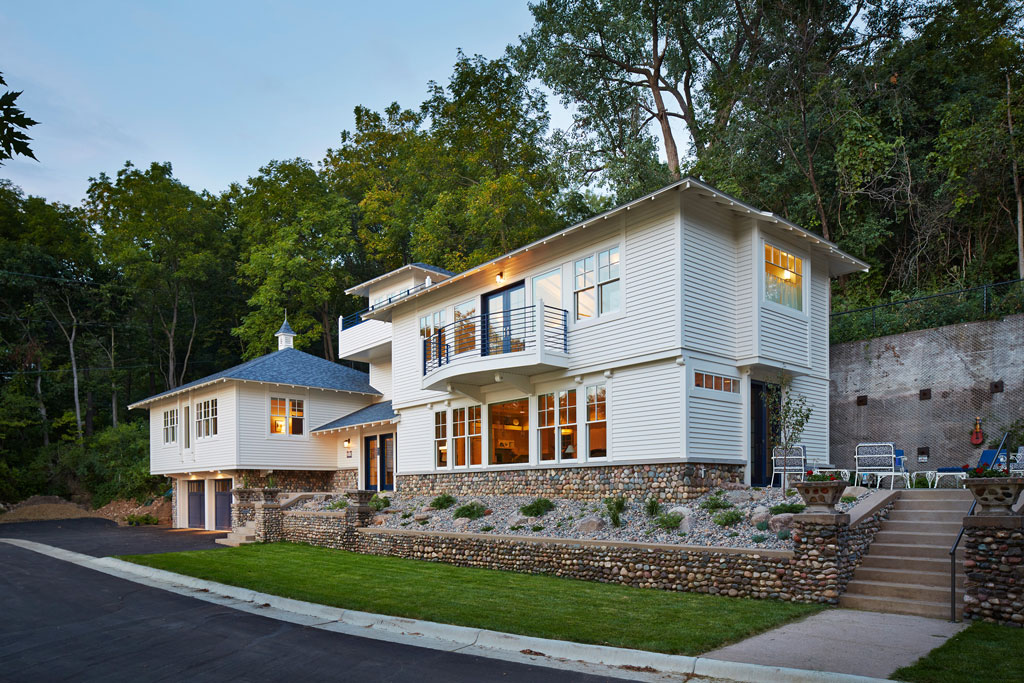 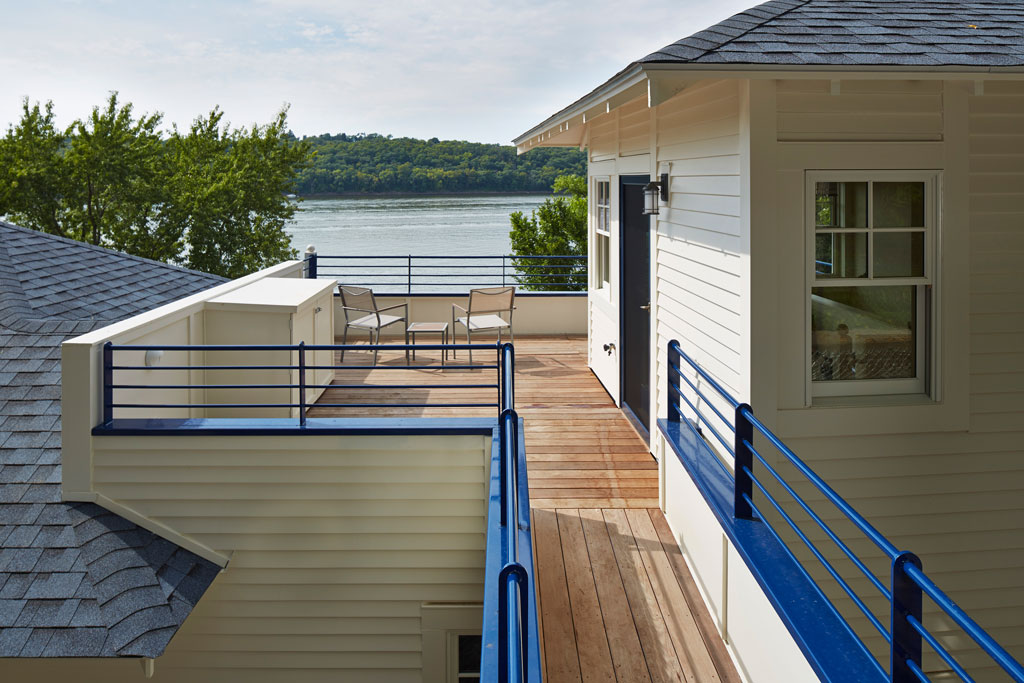 The Shielys were recently in a Wall Street Journal article featuring people who chose to purchase or build a second home based in part on the connection the property has with their past. Here is a link to the article. This blog piece has tried to address the project based on the architectural process involved with renovating or building a project that attempts to capture feelings and sensibilities of an earlier time. A project that can connect with memories that are meaningful to the owners. This was a project where family history and ties were important considerations in the design process. 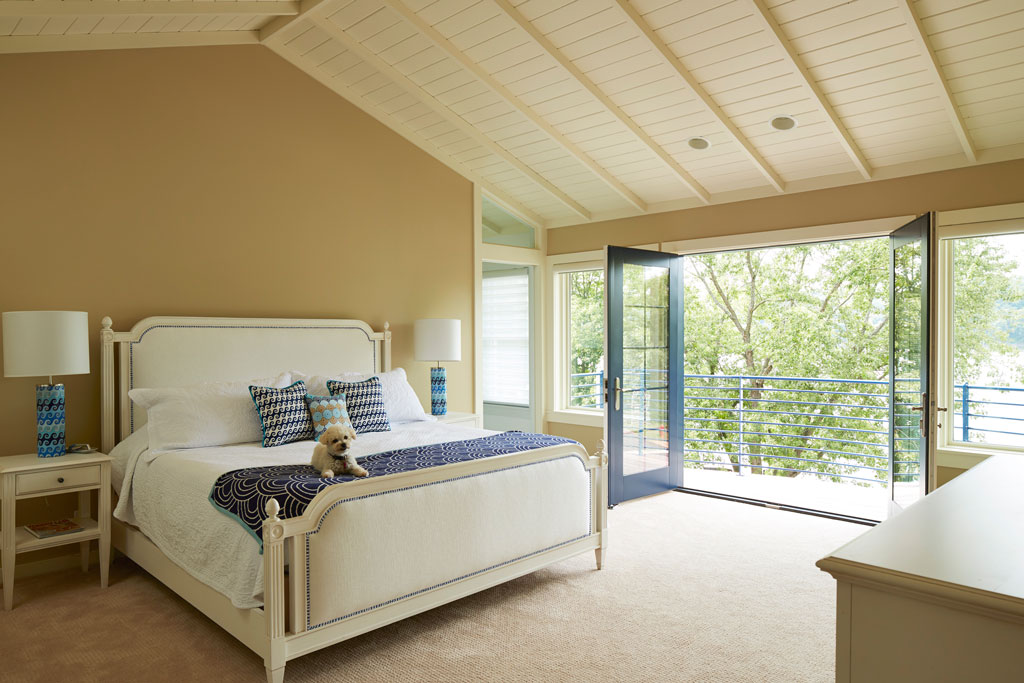 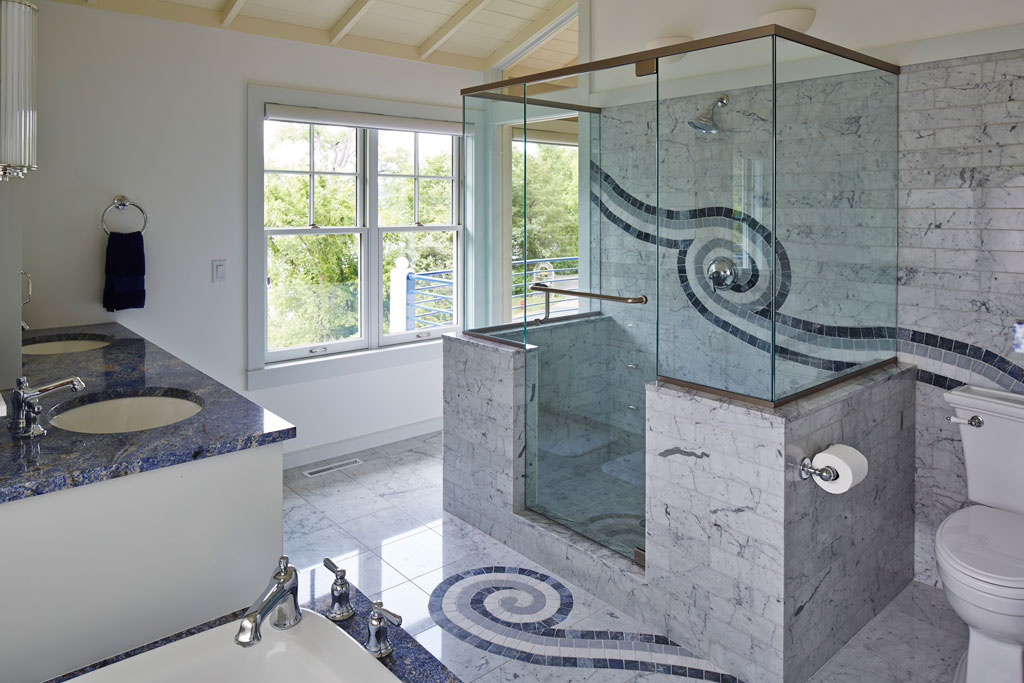 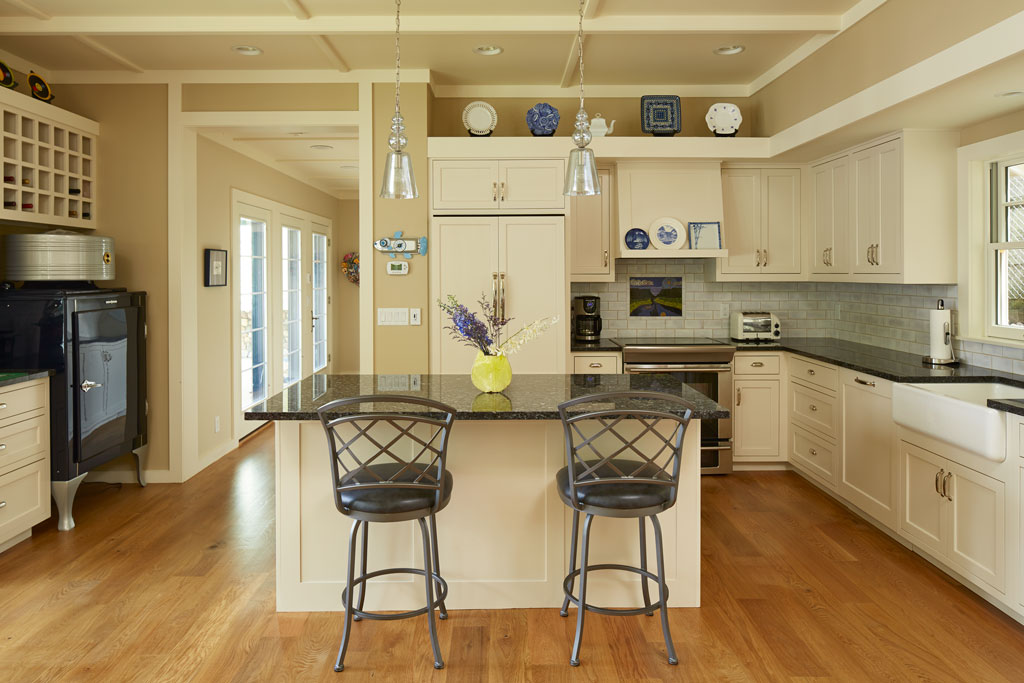 John Shiely named the house the “The Love Shack”. He is a rock and roll fan and musician among other things. The connection to the song by the B-52s and his family ties I will leave to him to explain…