I’m fascinated with towers. The last one I climbed was at Notre Dame in Paris, with my grandson setting the pace to the top. And I’m not alone, as witness to the many medieval towers in San Gimignano in Tuscany, built just for the fun of ascension and status. So it’s not surprising that towers show up in cabin land as well, and I’ve had the good fortune of designing several.

Cabin towers are predominately created for viewing, down the lake, up the mountain, or across the prairie. They often take the form of known iconic references, such as water towers in the wine country, fire towers in the mountains, farm silos on the prairie or light houses at the seashore. A few have no other purpose than an escape from the rambunctious family activities below. 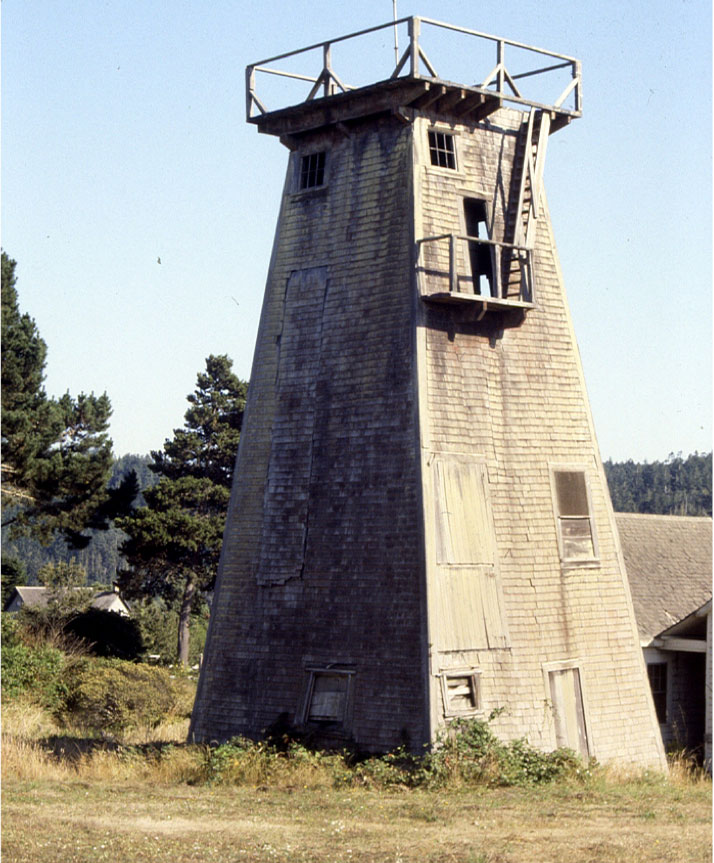 Local zoning ordinances often restrict the height of cabin structures, including towers. In the Midwest where I practice, that limit is commonly 35’, with latitude as to how that is measured. Yet, with ingenuity, I found 35’ can yield 4 stories of cabin living. That’s just what we achieved at the Dreamcatcher for Ludlow’s Island Resort on Lake Vermilion in Minnesota. And along the Mississippi River, near Red Wing, we achieved 3 stories in a 25’ limit. 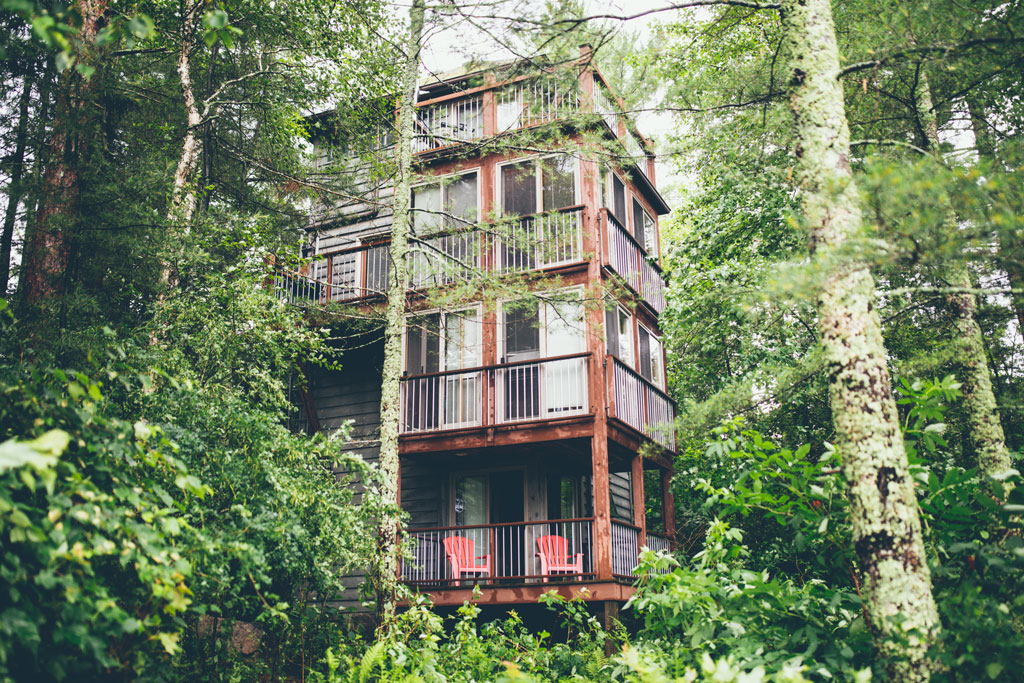 There are other challenges to building tall, such as wind load. In the Dreamcatcher we interlocked a sturdy 16’ square, 4 stories tall , with a glassy 12’ square, 3 stories tall. Thus the solid 16’ element withstands the wind shear, and the glassy element opens to the view. In the 25’ river tower we balloon framed the top two levels so as to reinforce the structure while still achieving lots of glass up top. 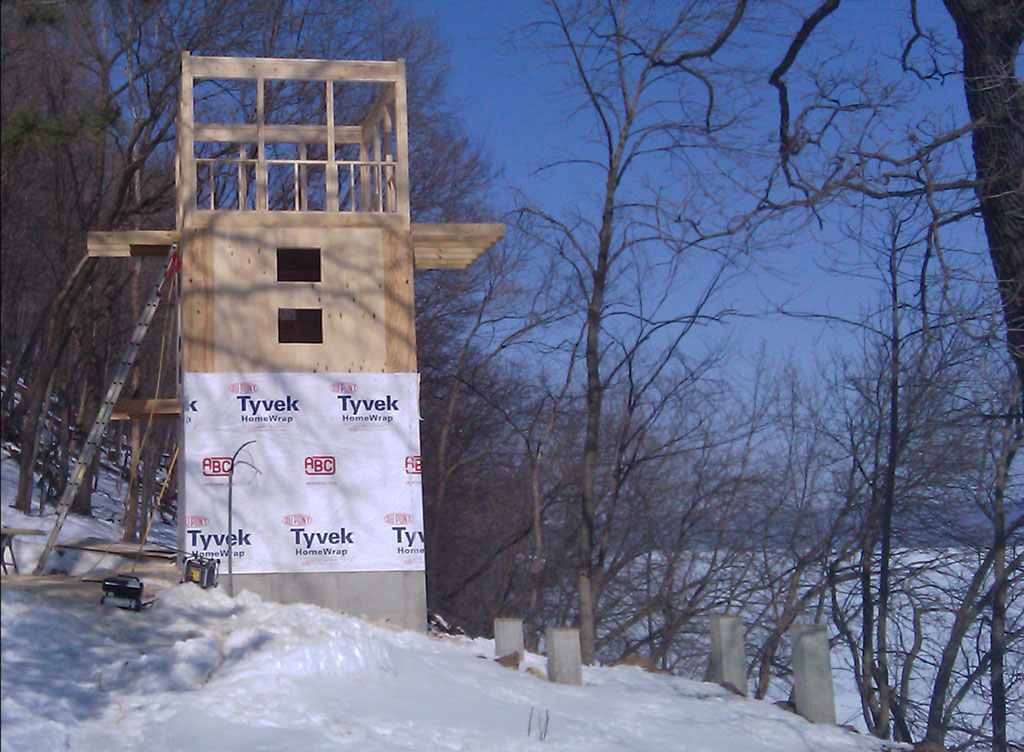 Towers need useful space and it’s very easy for their designs to become too fat, thus no longer towering. Although a bed can fit onto a tower floor, a master bedroom suite cannot. Built-in beds work best so as to eliminate some of the circulation space around the bed. Single beds are easily accommodated, often built in with a secondary purpose as a reading nook. 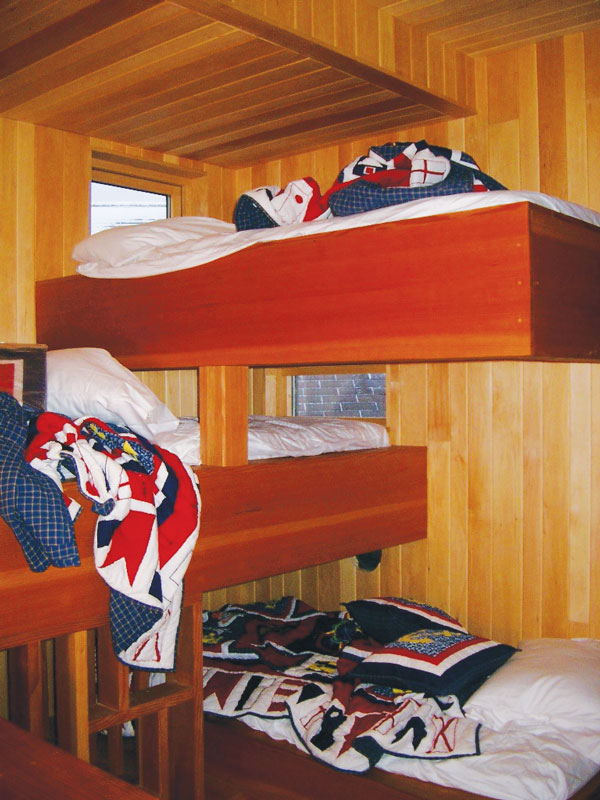 One of the biggest challenges is accommodating a code stairway, as it can take considerable space away from other functions. When a tower is interconnected to a broader lower cabin, I usually locate the stair from first to second floor elsewhere in the cabin. From second to third the stair can be in the tower and then from third to fourth a ladder or alternating tread stair might be appropriate. We successfully designed this feature in a cabin with tower on Lake Superior. 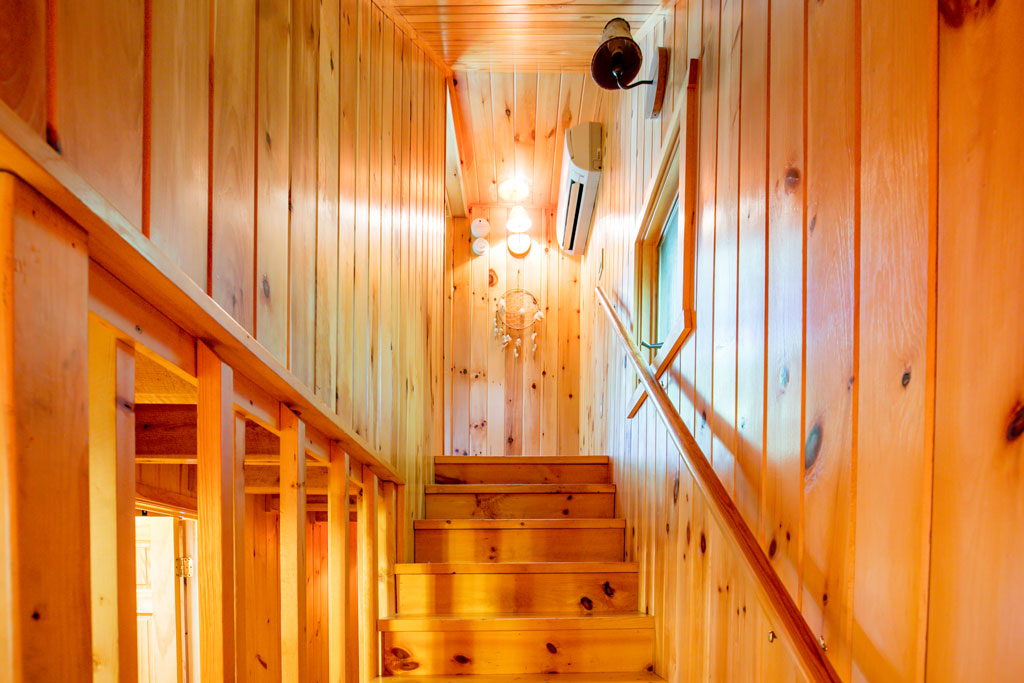 Tapering the tower walls will achieve a desired thin quality common to wine country water towers, but are difficult both structurally and functionally. For a three story tower in Northwest Wisconsin we tapered only two opposing sides. From a distance the taper appears as if on all sides. 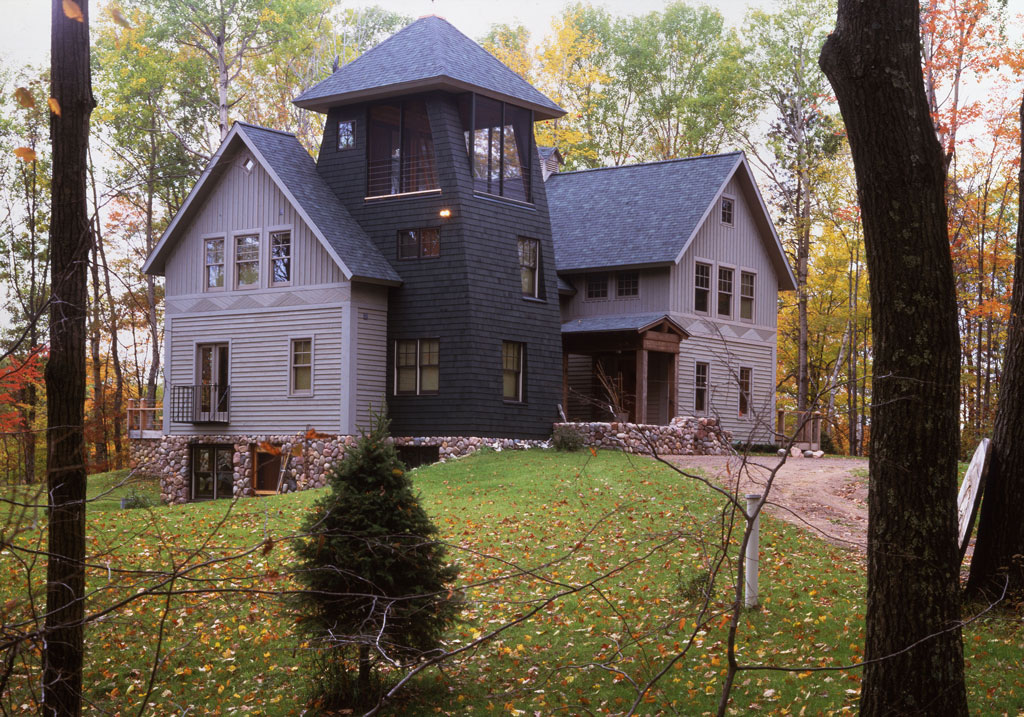 Several of our towers are capped by a hip roof with a band of windows just below. This gives the allusion of a floating roof, particularly in the glow of night light. The window band also acknowledges the panoramic viewing from the top and the feeling of being in the clouds. 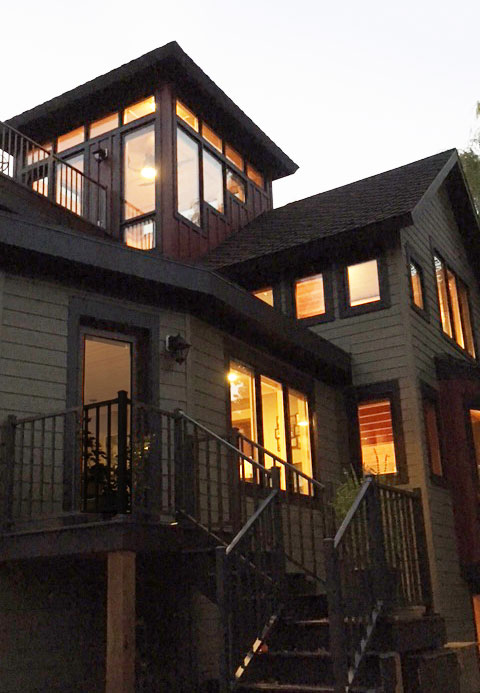 Several towers we’ve designed have outdoor viewing at the top, either for discrete sunbathing or night sky star gazing. Our Nova Scotia tower has views out across Chedabucto Bay at lower levels and from the balcony up high it views out the Bay and to the Atlantic Ocean. 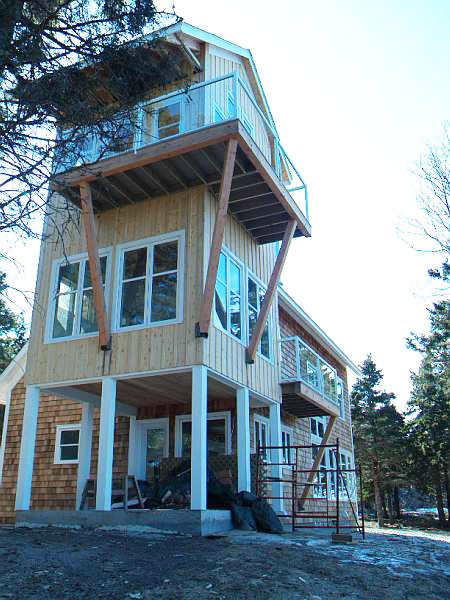 If you’re contemplating a cabin tower I suggest you prop a tall ladder up against a tree on the site to discover the great views you might have. Then check with your weather stats to ascertain the wind loads your engineer will need to address. A quick review of your zoning laws and then proceed to design. Above all, have fun, keep it thin, and reach for the stars. 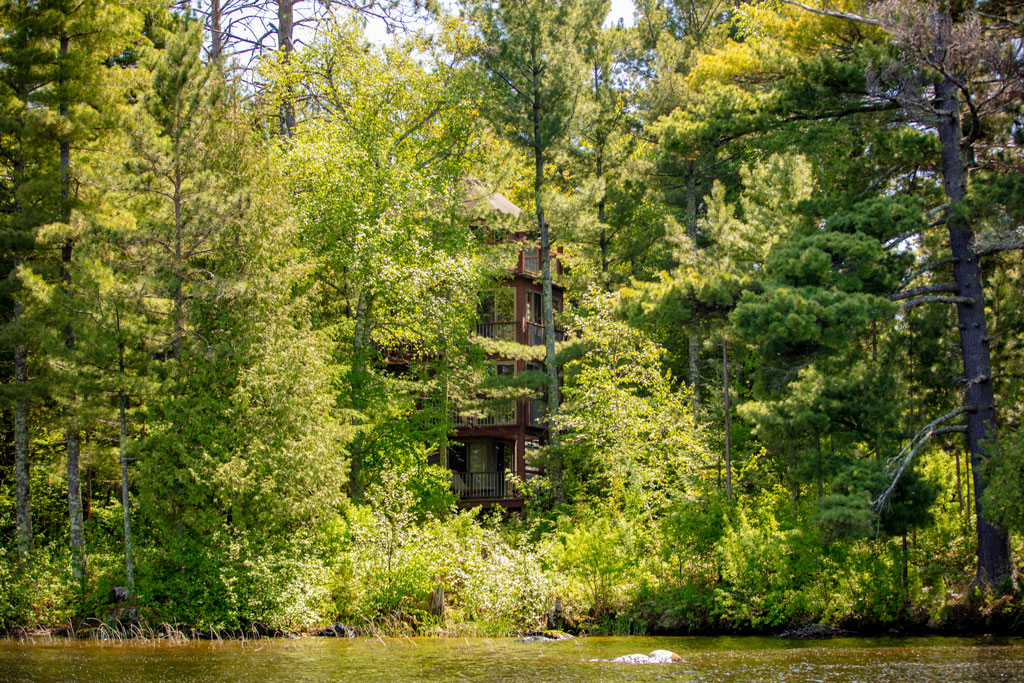