Over the course of the last two years I’ve been spending a lot of time on the Gunflint Trail. I used to make at least one pilgrimage to the pristine lakes of the BWCA (Boundary Waters Canoe Area) each summer, until I didn’t. Suddenly, an entire decade had slid away. For those who know it, you’ll understand how that watery wilderness draws you back, how that inky black sky pierced with billions of stars sparkling fiercely remains an itchy memory that eventually demands to be scratched. 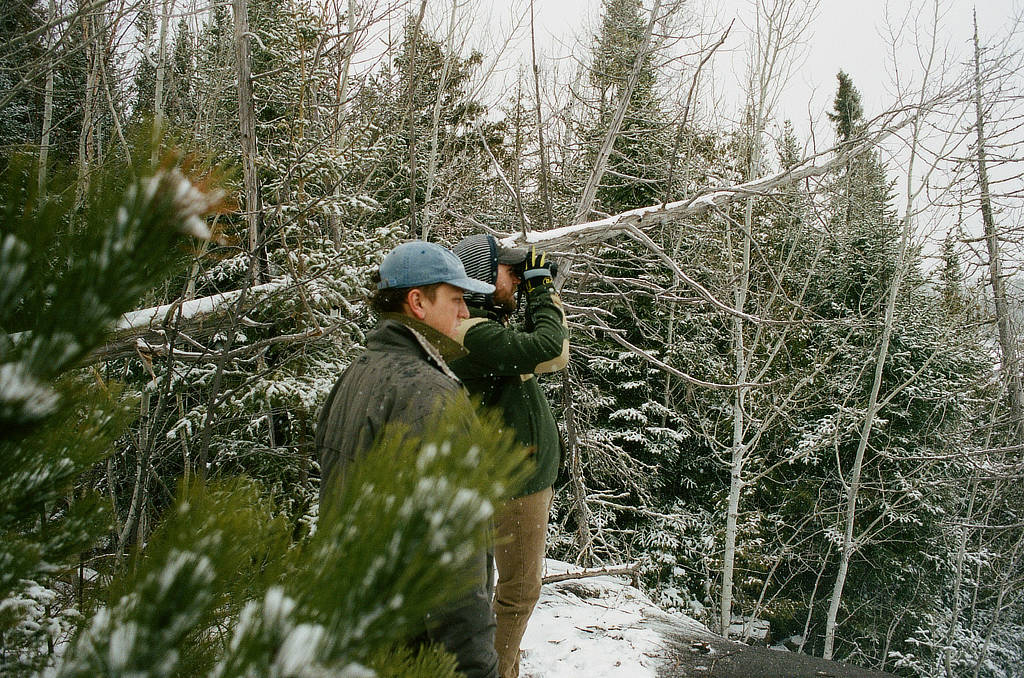 My recent trips back to the Gunflint began after my mom bought a modest 1936 log cabin on a canoe-in only parcel at the east end of Seagull Lake. The first time I visited was in the dead of winter, so rather than arriving by boat, we hiked across the frozen, snow-packed surface of the lake pulling sleds of firewood behind us. This was in late 2020, and became the first of many treks and paddles across that bay. 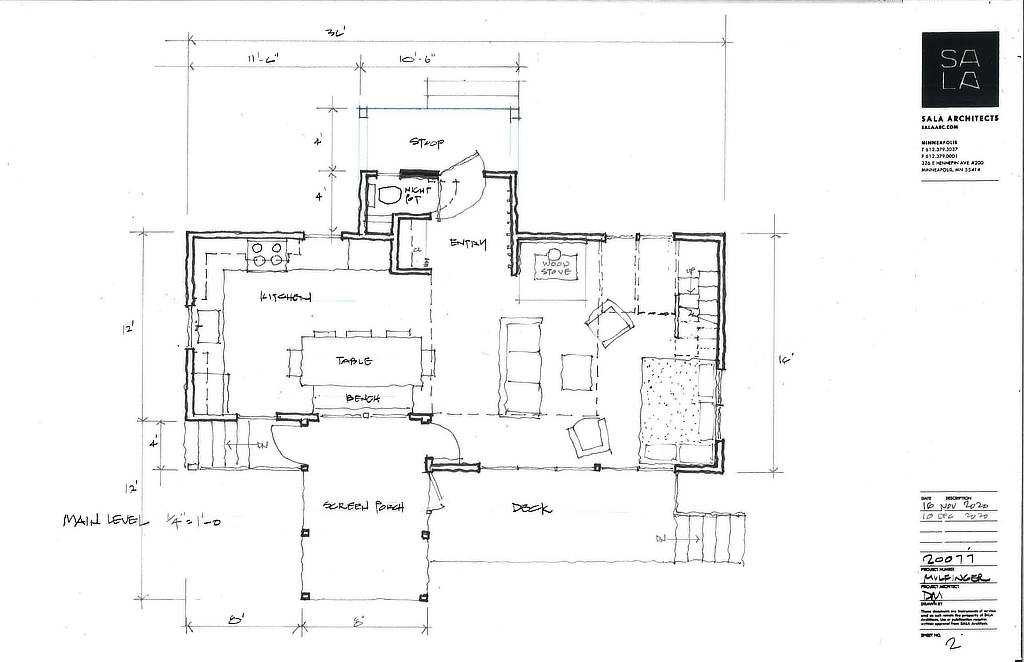 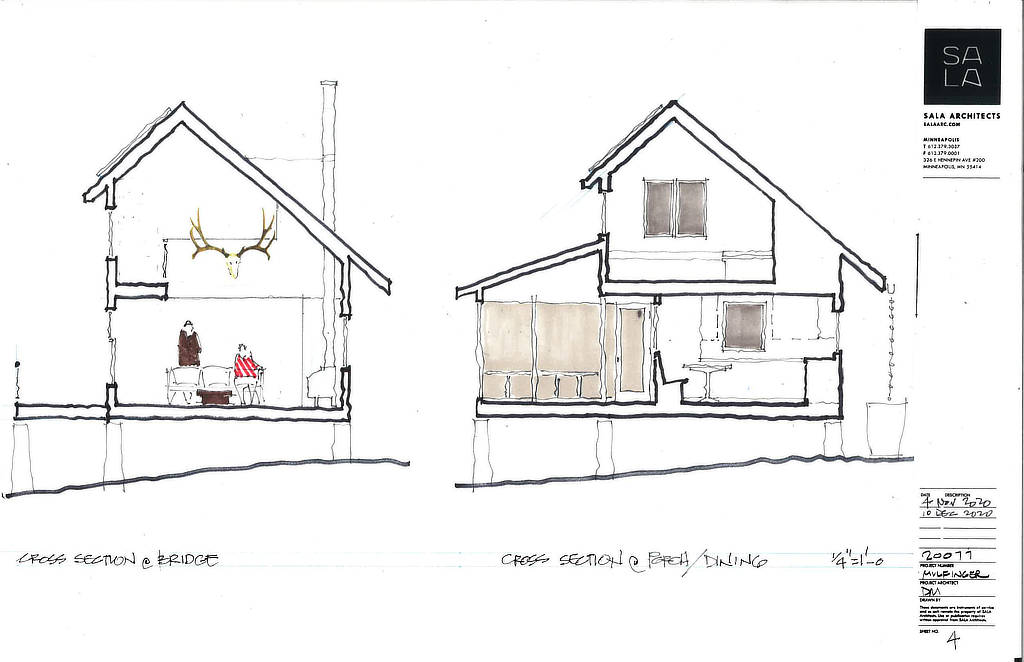 It was easy to fall back in love with the Boundary Waters. So, when Dale Mulfinger asked me to work with him on the design for a new off-grid cabin halfway up the Gunflint and just a few miles from the Canadian border, I was truly excited to bring my attention to an area that means so much to me. 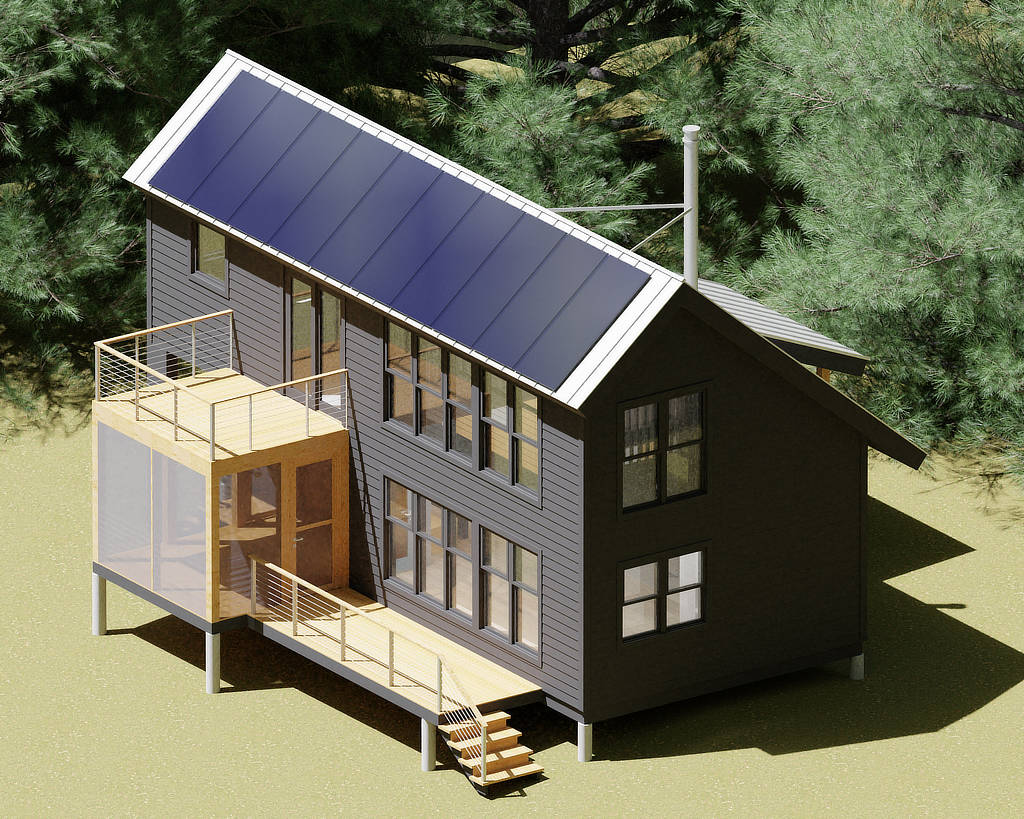 This was just my fourth project at SALA and immediately became a favorite. The design was charming and efficient, in typical Dale fashion. Exposed 4×10 Doug fir beams, 2×6 tongue-and-groove flooring in the upper level that doubles as a beautiful wood ceiling below, clever cantilevers, and a double-height wall of windows give the interior character and make it feel lofty and spacious in spite of the building’s small footprint. Fully off-grid, the new cabin will produce all of its own electricity with a solar array mounted to the south-facing standing seam metal roof. In winter, the space will stay warm with an efficient wood-burning stove. 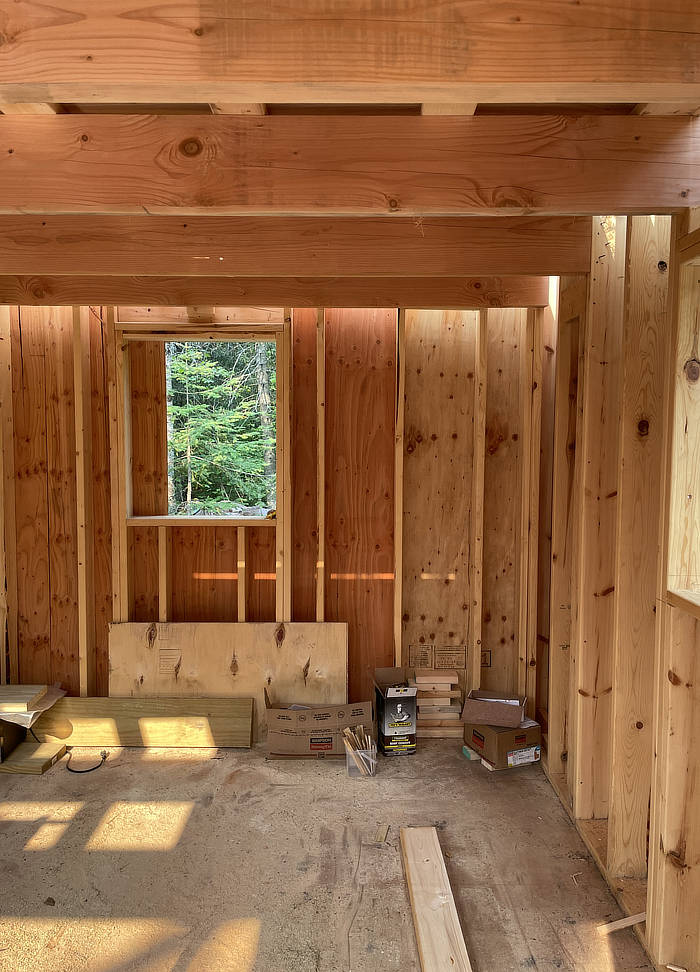 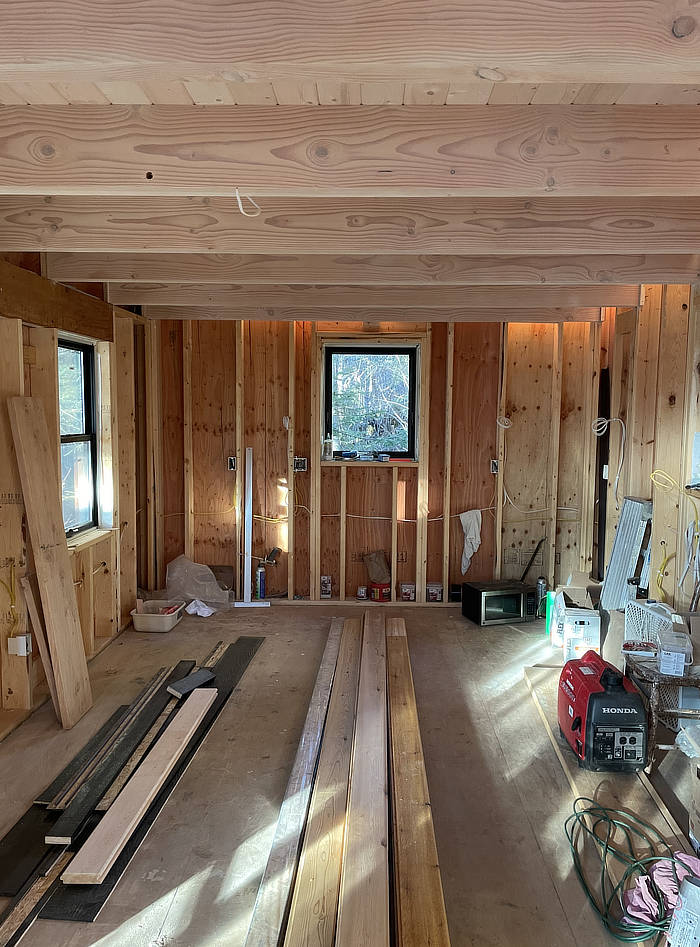 We worked carefully with our clients to develop a palette of materials that will be warm, elegant, and appropriate for the Northwoods location. Also important was that the materials would offer unique and surprising moments of delight, the most exciting example of which being the underside of the high vaulted ceilings. 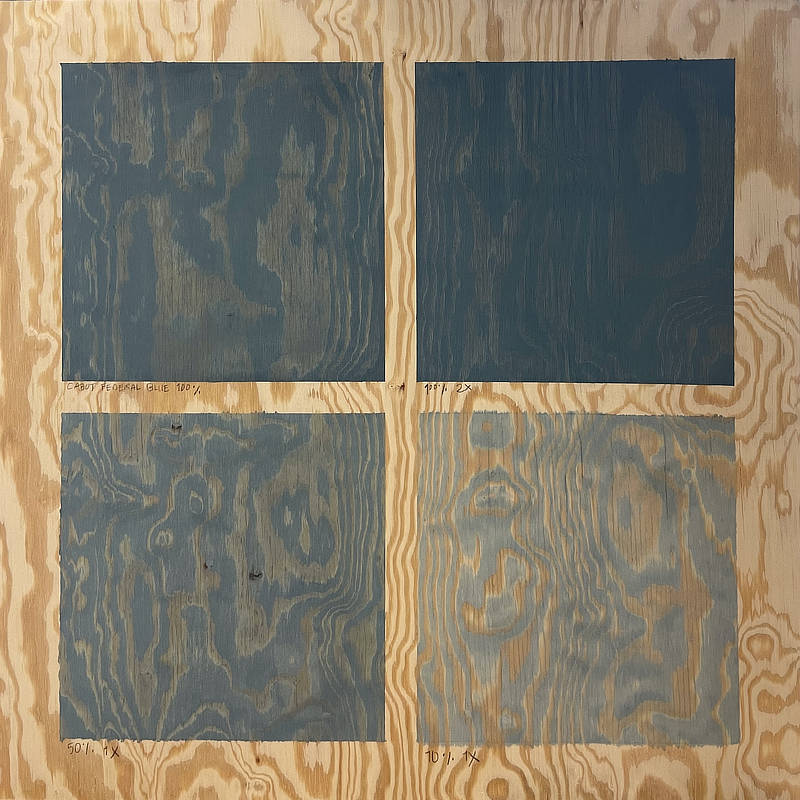 Dale proposed a plywood finished in blue stain that was applied, then quickly wiped off to reveal the grain and patterning of the wood beneath. A semi-transparent sky-blue ceiling with waves of cloudy plywood shining through–this was the idea. In order to determine the right plywood, the right color, and the right process for applying and removing the stain, we created a series of samples and mockups until we discovered the perfect process: BC plywood finished with Minwax “Sky Blue” semi-transparent water-based stain diluted by 50% with water and wiped away immediately after application. The BC refers to the grade of the plywood (one side is a B, the other a C), and, interestingly enough, this lower-grade product was much prettier than the far pricier cabinet-grade plywood we tested. This is thanks to the wavy variation in the BC grain resulting from the log-peeling process used during its production. 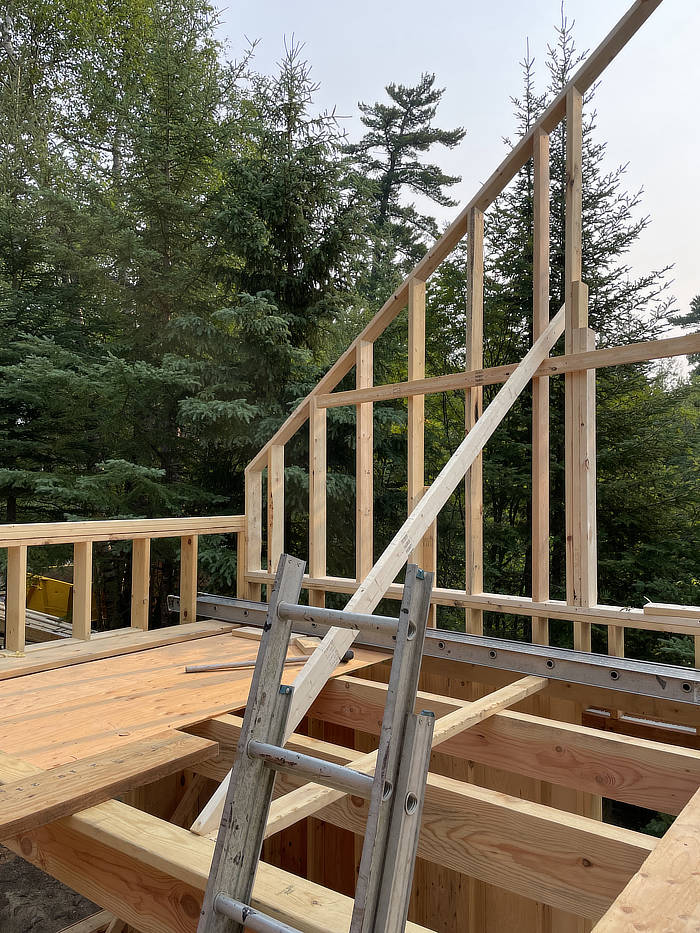 I visited the cabin during construction in early August as the walls went up, and in late October when it was weathered-in. I am looking forward to the moment the snow melts, and for my next trip up the Gunflint Trail. I can’t wait to step into the newly completed cabin and stare up at that sky. 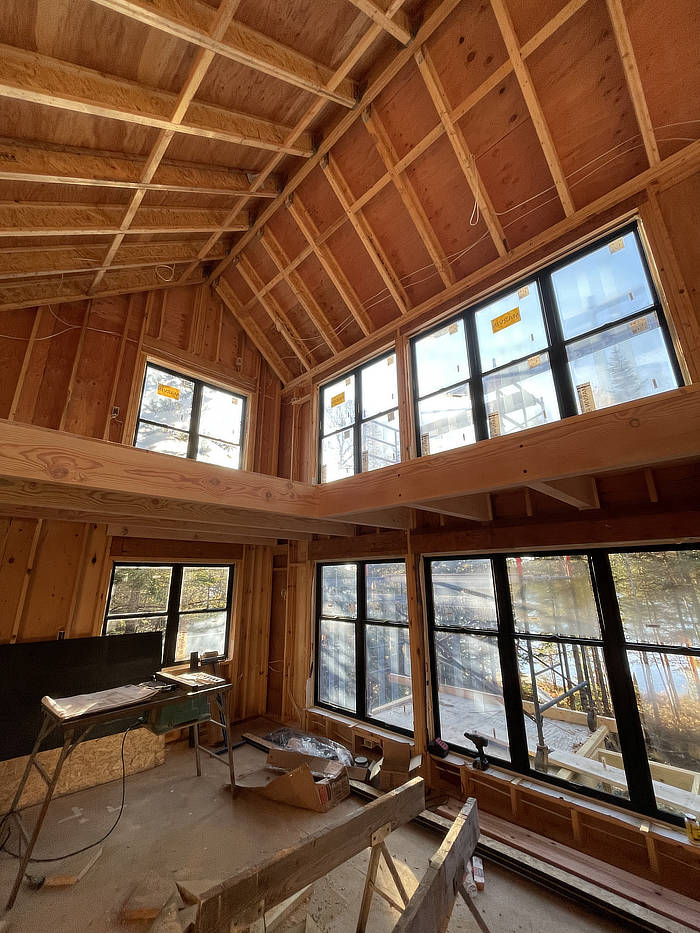