I was absolutely delighted to respond to an inquiry in my own neighborhood a few years ago for a potential bathroom and kitchen remodel. The new owners of the century-old home were an enthusiastic young couple new to owning a home and their first together. The project chemistry was immediate! She had worked for an architect in her undergraduate years, and while ultimately choosing another professional direction entirely, proclaimed she’d learned enough to know when to engage a professional for expertise. For me, facing many similar challenges with the needs of our geriatric house, there was a common bond through mutual questions, ideas and opportunities.

After assessing their desires and conditions for the house it seemed the bathroom was the immediate task at hand. They were lucky to have a shower in the basement, but navigating two flights of stairs to use it would need to become routine until the bathroom was renovated.

The existing and only full bathroom was on the second level near the bedroom, and what I immediately appreciated about it was that it was a bath room. It had wood floors, built-in linen, a small vanity and toilet, and a claw-foot tub nestled in the corner under the sloping roof. The remaining space was largely open in the center with a nicely sized window and door to a small balcony.

The addition of a shower was key but it would be impossible to add a shower to the current tub location beneath the sloped ceiling, so any solution would need to incorporate the open floor space. I was so immediately struck by the casual functionality of the room. It was almost as if the original home design hadn’t even included a bathroom; rather, like the fixtures had been added around the perimeter of a small bedroom. 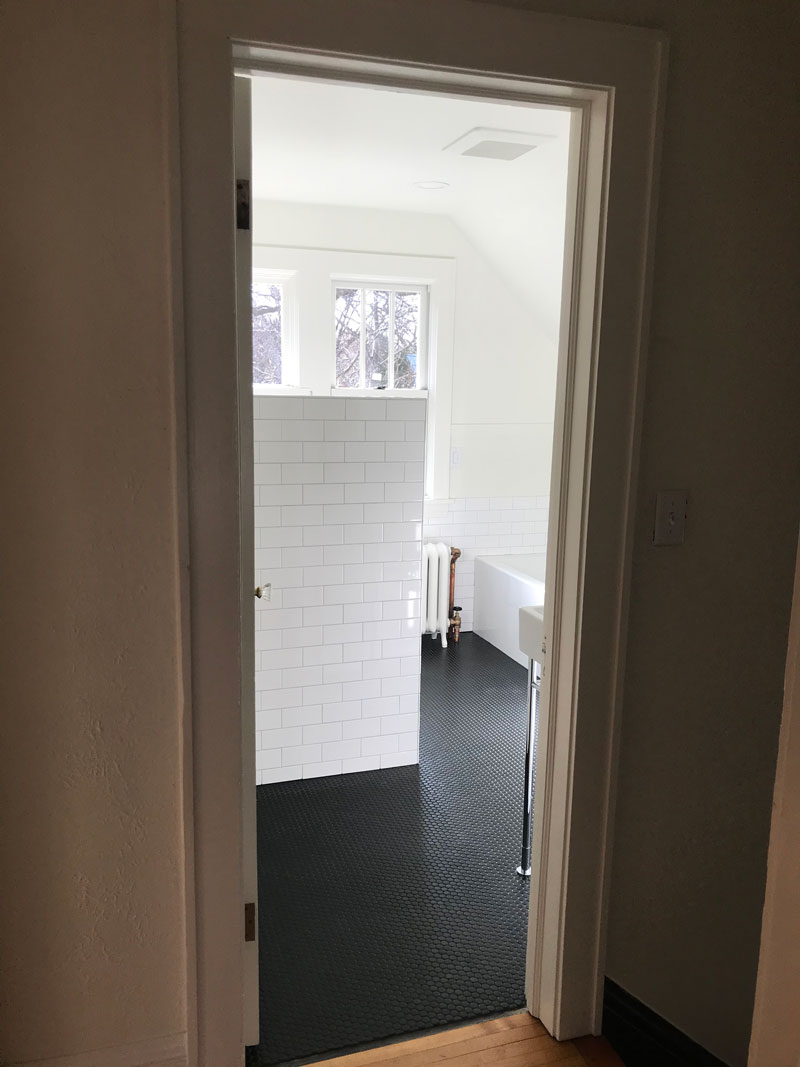 In large part, economy drove the solution: a shower would be added to the open corner, replacing the door to the unusable balcony. Other fixtures would be updated in their current locations with more functional selections, including a wall-mounted toilet to increase clearance to a new soaking tub. 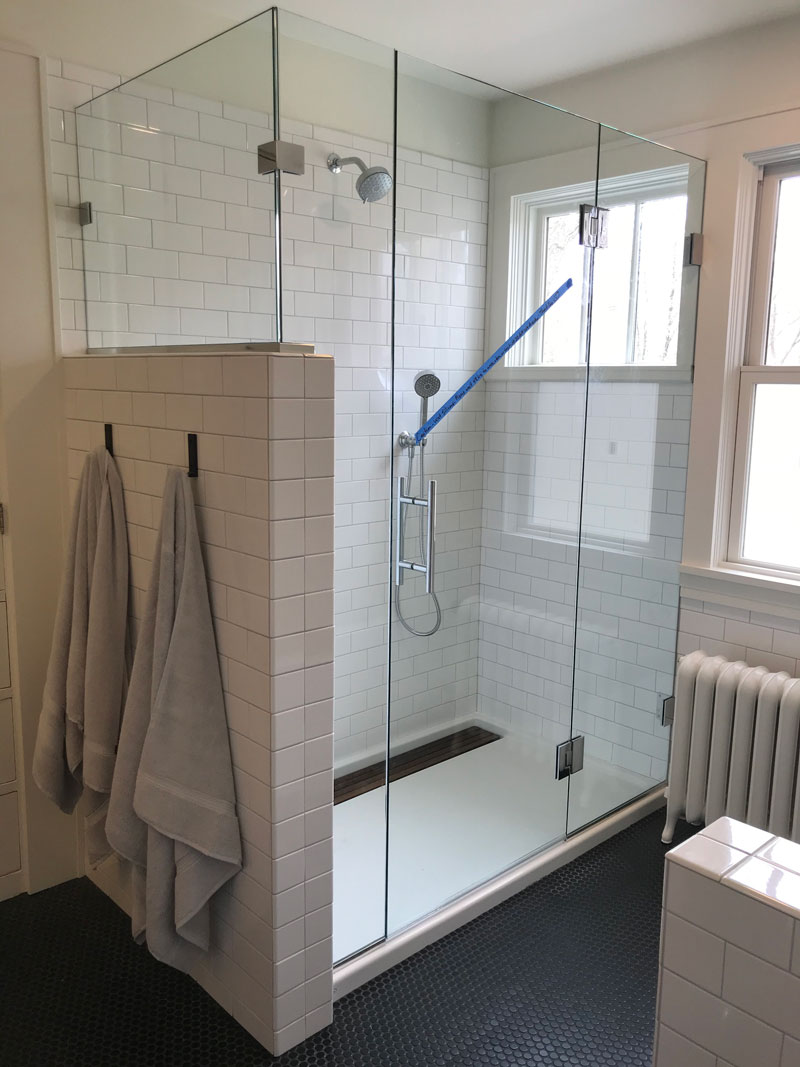 The last detail important to retaining the classic sense of this bath room was selecting an appropriate and elegant tile. The existing bath had a press-board tile-pattern wainscot—probably the result of an earlier economy-driven solution. But for this owner, tile was important, and its traditional installation included true bullnose tile and highly choreographed alignments. 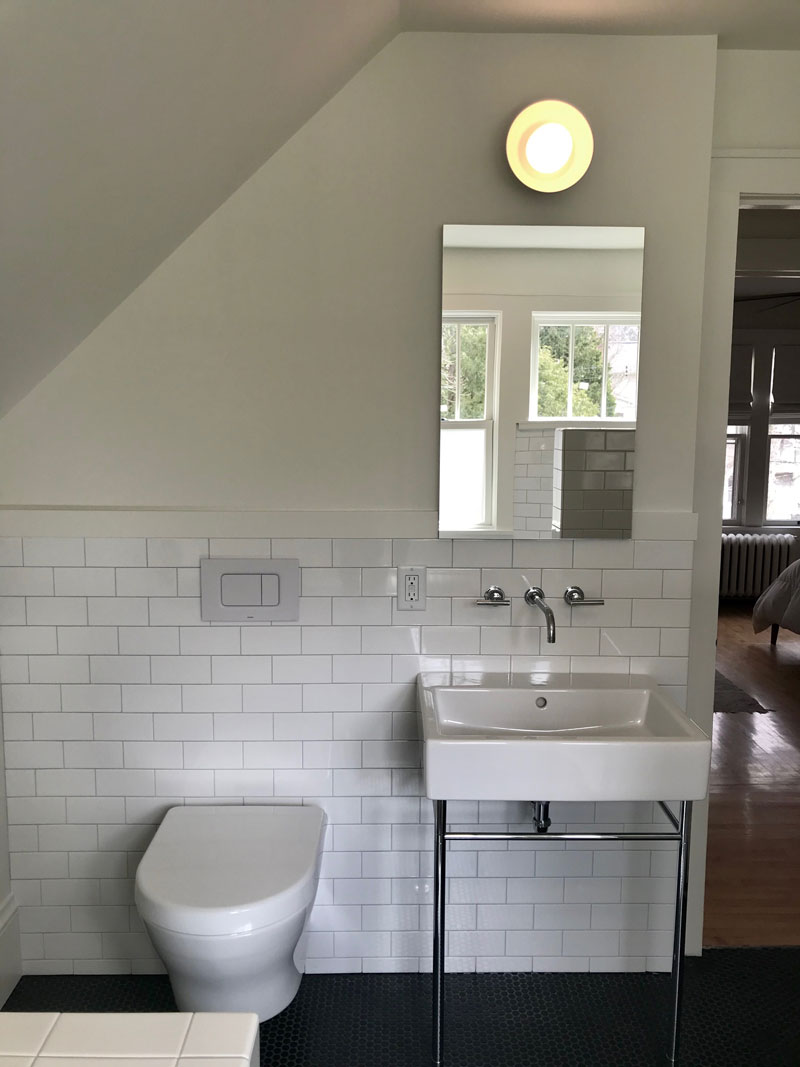 Construction (considered essential, and thankfully so in the case of this one-bathroom house!) began just before Covid set in, and the true joy of this project was the frequency of progress updates and unexpected delights captured in text photos by my new neighbors just a few blocks away…

“Does my floor look like an Anaconda?” Answer: not at all! 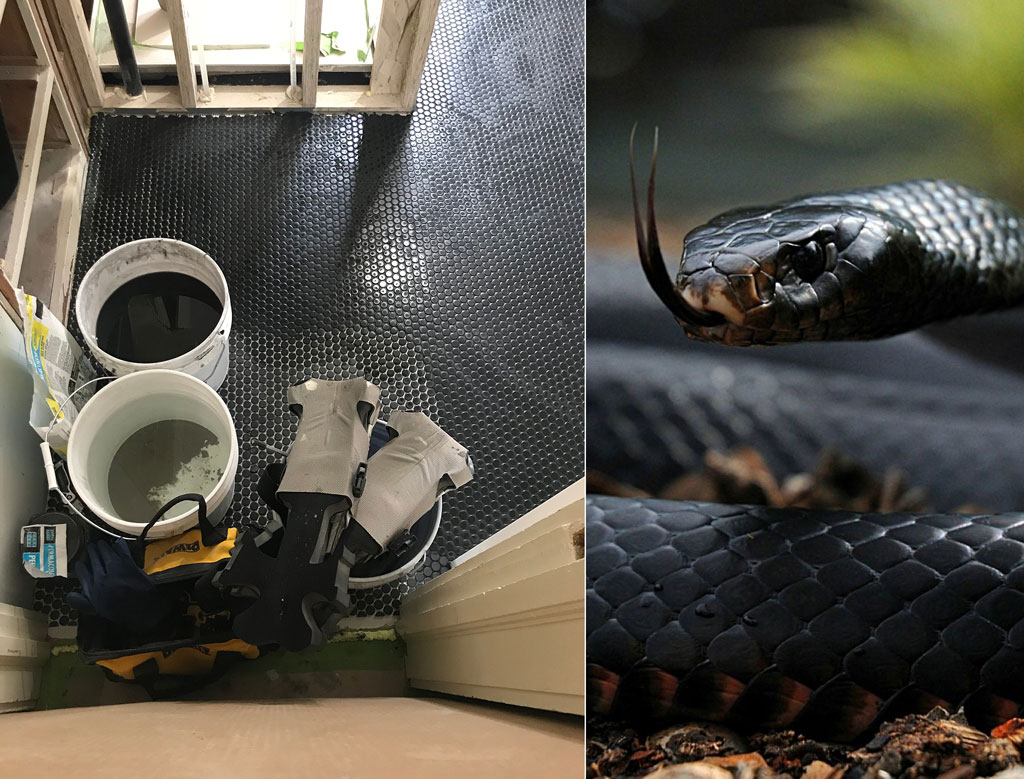 Sunset reflected in tile and refracted through obscured glass… 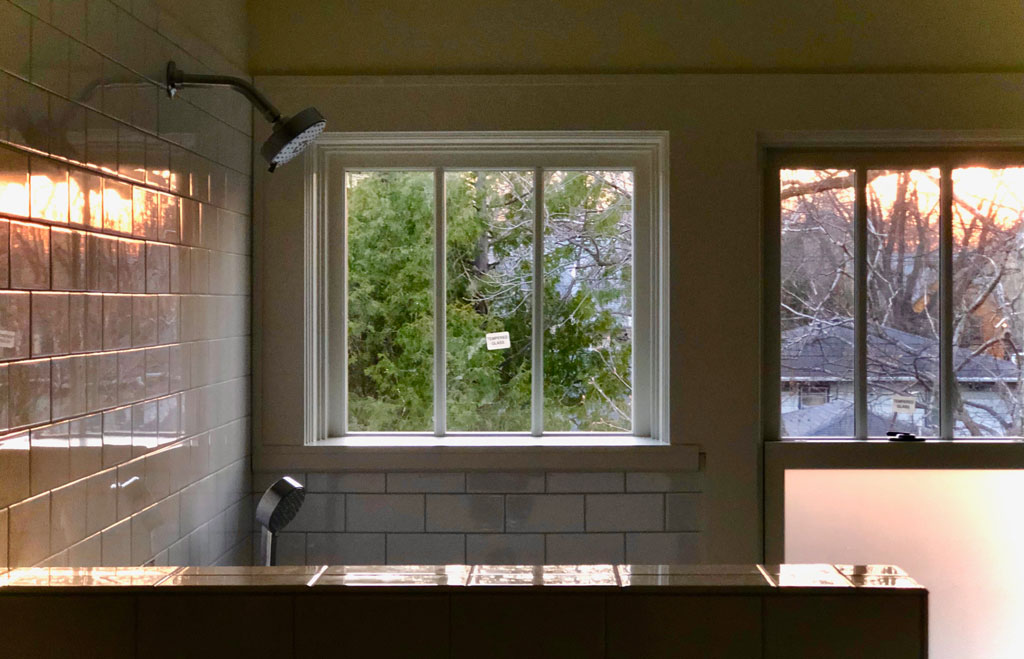 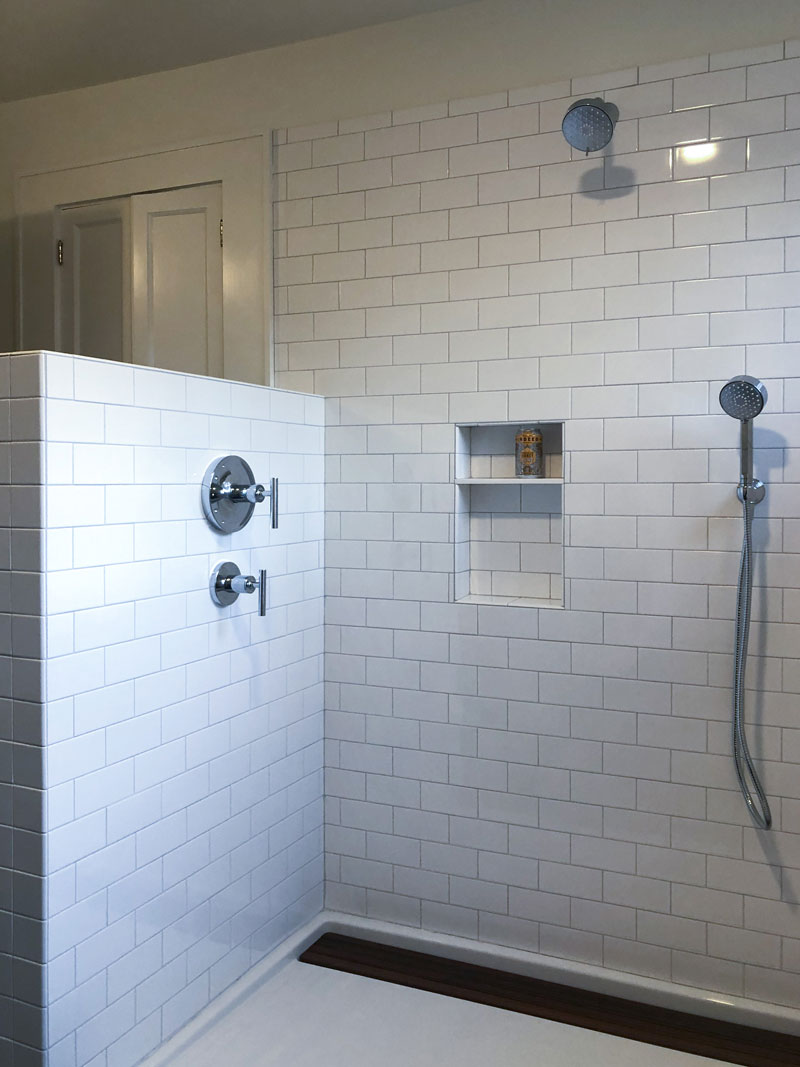 And Otis, waiting for his soak. Truth be told, I asked for these, but only because I was informed he was the most frequent user of the tub! 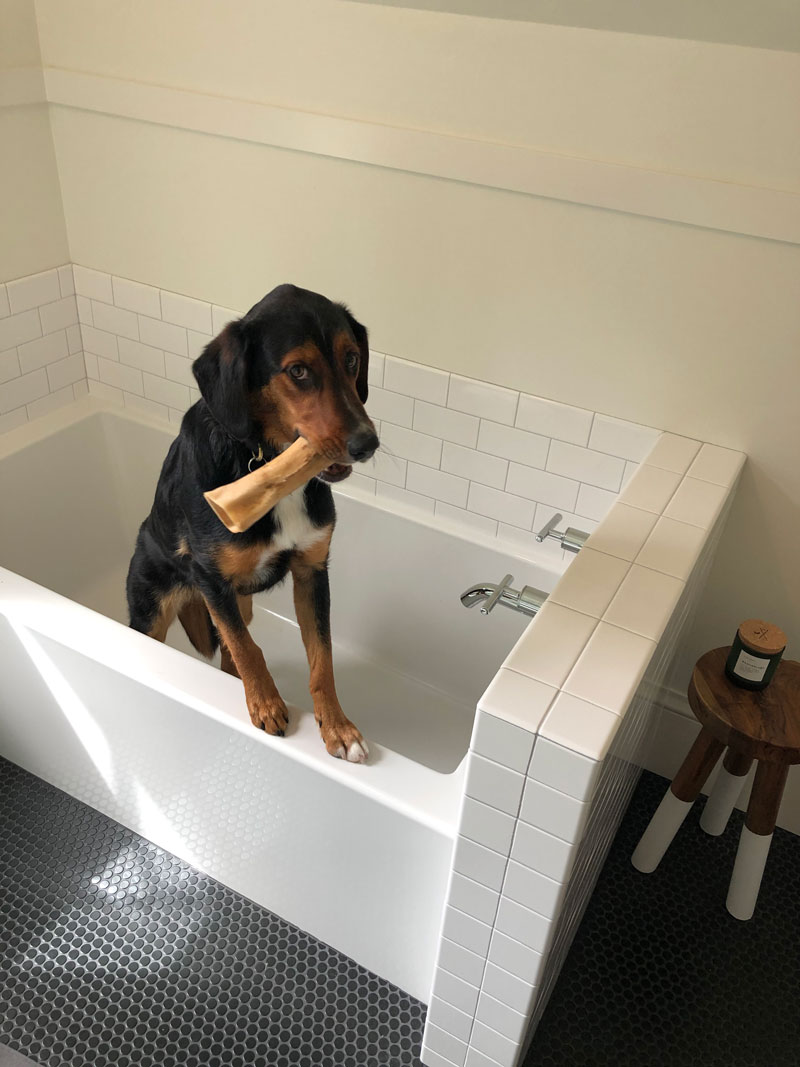