In this multipart post we’re discussing projects with our firm that found accelerated exposure and success beyond what the designer had anticipated. In Part One we discussed the lightning paced publicity of the ESCAPE project, which currently continues to receive a lot of unexpected attention. In Part Two the contrasting success of pre-World Wide Web times was delved into with Michaela Mahady’s award winning Maple Forest design. In this installment we’re not examining a specific project, but a book by one of SALA’ s founding partners Sarah Susanka titled, “The Not So Big House: A Blueprint for the Way We Really Live”. The book rarely needs introduction in the architecture community and features several projects Sarah designed along with a collection of other SALA projects with the “Not so big” concept applied. 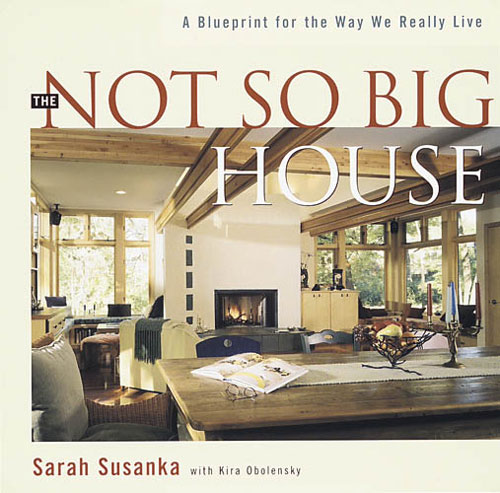 When the book was released in 1998 it was indeed an overnight success, however this was only the beginning of a long and astoundingly successful road for the “Not So Big” philosophy that still continues today. The primary theme of the literature and philosophy is to, “build better, not bigger,” which emphasizes quality of space rather than a specific size. The book contains a catalogue of early SALA work including Sarah’s own house that embraced the “Not So Big” approach in their design. Many credit Sarah’s book for sparking what is now a small house movement that advocates living more simply on a social and architectural level. In many ways, “Not So Big” runs counter to how the public sometimes sees architects and high quality design as only for elite classes. Here is an excerpt from The Not So Big House that frames the philosophy well:

When most people contemplate building a new house or remodeling an existing one, they tend to spend time focusing on floor plan options and square footage. But in a completed home, these are only a very small part of what makes an impression. What also defines the character of a house are the details, such as a beautiful stair railing, well-crafted moldings around windows and doors, and useful, finely tailored built-ins. These details are what attract us to older homes. New homes should be no different.

Even though the family room and the kitchen are the most popular places in a home, many houses still feature beautifully appointed formal living and dining rooms that sit empty most of the time, awaiting the arrival of guests. Although life at the end of the 20th century is quite informal, Emily Post still rules over the floor plans of our houses, making sure that they mind their manners.

Its time to rethink our houses and to let them become expressions of the way we really live. A Not So Big House can be Not So Big because the “dinosaur” rooms are replaced with spaces that reflect the way we eat and the way we live. The floor plan of the Not So Big House is a map, not a fossil, that reveals the lives of the people who live in it today.

A TED Talk with Sarah that includes her experience for writing The Not So Big House.

Over a half million copies later, it’s a solid assumption that The Not So Big House struck a chord with the public. Sarah went on to be featured on The Oprah Winfrey Show, The Charlie Rose Show, and NPR’s Dian Rehm Show. She was also written about in USA Today, Boston Glove Magazine, and the Wallstreet Journal. Subsequently, Sarah was named “one of 18 innovators in American culture” by U.S. News and World Report in 1998 and “top newsmaker” in 2000 by Newsweek magazine. The accolades and awards continued as Sarah released additional books on the “Not So Big” philosophy.

So, where does SALA fit in with all this? After sixteen years Sarah left the firm in 1999 to devote more time to writing and speaking. The tremendous amount of publicity received from The Not So Big House also arrived to SALA as well. In the following years after the book’s release and Sarah’s departure, the firm rapidly expanded its size to meet the demands of a tidal wave of projects, many of which stemmed from inquiries that came from The Not So Big House sensation. This all led to the members of the firm asking many questions about this new brand of success. This is a departure from other surprise sensations for SALA in that it wasn’t potentially affecting an individual architect, but the entire firm as a whole. Of course was a wonderful challenge to have given clients were flowing in the door. Nevertheless, SALA has several architects with their own individualized styles. Would SALA become inherent with the The Not So Big House? Would the majority of inquiring clients be looking for the “Not So Big” style and philosophy? How would the “Not So Big” concept and its success influence the firm long term?

Luckily, the firm was able to balance out the tidal wave of work and publicity largely through successes of its own. This allowed room for SALA to be connected and even somewhat embrace the “Not So Big” philosophy, yet not be directly associated with it by the public. Being able to maintain this equilibrium worked well in the end for SALA, but it also bestowed lessons on how the firm must stay mindful of its position and appearance in the marketplace. Good architecture is at the heart of the firm. The means with which this is found is a unique journey between the client and the architect. Expectations of potential clients are best framed around this concept rather than any specific architectural philosophy. “Not So Big” is a historical snapshot that affected SALA, but doesn’t define it.

Ryan Lillion is the resident IT guy at SALA Architects and digital custodian of the SALA Blog. Ryan is thrilled to the rafters when you follow SALA on Pinterest, Facebook, Houzz, and Twitter. Stop back at the SALA Blog for Part Four of overnight sensations where we’ll be examining our most subtle type, yet most essential variety of success to the firm.